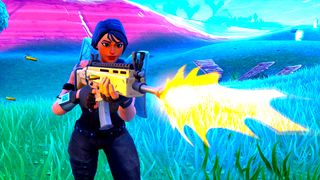 Most of us play games in our spare time. Some of you might even make games in your spare time. But when you’ve got millions to spare, there’s only one thing to do: buy a private island and host your very own battle royale-inspired event. That’s exactly what one mysterious millionaire is doing, and they need a gaming fan to help realise their vision.

Paying approximately £45,000 for six weeks’ of work, it sounds like we might be seeing a real version of Fortnite play out, though with less death and guns. And by ‘less death and guns’, I mean none whatsoever. Regardless of what the tasks actually involve, there’s a £100,000 prize for the winner. Now that’s a victory royale worth caring about.

Instead competitors are going to have Airsoft guns, ammo, and “touch-sensitive body armour” for the event, which will take place over three days, so competitors will be camping overnight. Ok, so they won’t have to forage for food, but even so the event basically sounds like a slightly tamer version of the Hunger Games. Kicking off this winter, about 100 members of the public can register for the chance to compete. Presumably you’ll need to be a paintballing pro to even stand a chance, but if this becomes a success there’s the possibility that real life battle royale could become an annual thing.

The anonymous millionaire is being helped out by the ‘Amazon for millionaires’ marketplace Hush Hush, and if you quite like the idea of earning £45,000 for less than two months' work, the deadline for registration to help plan the event is April 22. You would have to travel to the location itself to have a look over the landscape, but I think most of us could stomach a trip to a private island if we absolutely had to (heavy sarcasm).

If reading that has got you in the mood for some battle royale, here’s some Fortnite tips to help you get that coveted victory royale, or look below to see what could be the future of Battle Royale!