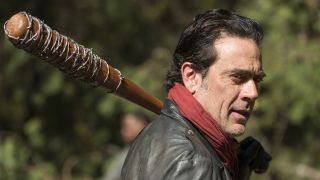 The communities of The Walking Dead banded together to try and finish off Negan once and for all. Things didn’t go quite exactly as planned, so not only is Negan still alive, but our last sight of him was at the head of a veritable army of Saviors, telling them they’re going to war. It seems pretty clear the conflict between Saviors and Survivors is going to be head-on and bloody next season, but I’ve still got plenty of other questions that still need answering. Such as…

1. What were the terms of the Scavengers’ deal with Negan?

Jadis betrayed Rick because Negan offered her a better deal - something involving ten people. But is Jadis giving or receiving those ten people? Was she bargaining to get some Scavengers returned to her, or did Negan promise her a small squad of Saviors? Technically, the Scavengers held up their end of the deal by turning on the Alexandrians, so we’ll have to see if they end up trying to push Negan into making good.

Eugene came up with a thoroughly plausible way Sasha might have died that didn’t include his poison pill, and maybe Negan bought it and maybe he didn’t. Negan has bigger fish to fry at the moment, but he’ll likely still find an unpleasant way to test Eugene’s loyalty just to make sure it’s legit.

3. What happens to Oceanside?

Oceanside was the one community that didn’t join the fight, and Tara promised the Alexandrians would return their guns after the fight. Well, that sure doesn’t seem likely to happen, so what happens to Oceanside now? Do they just chill by the sea, defenseless, or do they pull up stakes and move in with the other survivors?

I’m still not sure I understand why the Alexandrians let Dwight go, but the question remains whether he was telling the truth when he said he wanted Negan dead. Everything he told Rick was true - his reason for doing Negan’s bidding is gone now that his wife has escaped the camp - but that doesn’t mean he hasn’t abandoned his plans of dismantling the Saviors. He had grand designs for eliminating them once and for all, but that relied on Negan’s death, which didn’t happen. So what’s his next move?

We know Gregory was getting anxious about Maggie being the de facto leader of Hilltop, and we know that he spoke to Simon about needing help. We know that Gregory asked his aide to drive him somewhere. So where is he? Did he head to Sanctuary to talk to Simon about bumping off Maggie? If so, kind of a wasted trip, because the Saviors are very much aware that Maggie is a problem now.

6. Is Maggie going to have her baby, or what?

A big, pregnant Maggie sure would be problematic in the middle of a war with the Saviors. Even if she has the baby, it’ll just be a prop like Judith was, trotted out to make a point, then shoved back out of the way when things actually need to happen. Does anyone want to go through Lori 2.0? No.

7. How did Shiva know to only attack the bad guys?

Carl was saved from having his skull caved in by a little bit of tiger ex machina as Shiva leaped in to munch on some Saviors, but somehow, she knew to only attack bad people. Look, I want a pet tiger as much as the next person, but the idea that once she’d decided she was at a buffet she’d only pick from this plate and not that one is pretty ridiculous. She’d have eaten a Savior, had a nice bit of Carl, a wee bit of Jadis and then washed it all down with some Carol. Because she’s a freakin’ tiger. (I know the photo is blurry, but I simply couldn't resist. Yes, the guy in the blue suit is Shiva's stand-in. Doing a darn fine job of it, too.)