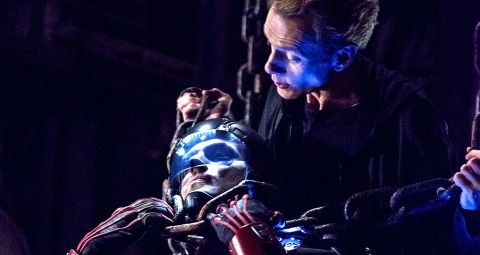 There’s just a pinch of The X-Files in the way that “Broken Arrow” opens: torch-flashing security guards, a mysterious, supernaturally-powered figure in the shadows and a grisly bit of blood-letting to take us into the credits (the splattered TV screen is a particularly grisly touch). Fabled creature performer Doug Jones (Hellboy, Pan’s Labyrinth) brings a lanky creepiness to the role of electricity-hurling supervillain Deathbolt, an underwritten role that definitely benefits from Jones’ unique physical presence.

Deathbolt may be a sketch of a character but his appearance is clearly signposted as a gamechanger for Arrow and The Flash. He’s the first metahuman we’ve seen who didn’t originate in the dark matter explosion that gave us the scarlet speedster. You can feel a narrative shackle being lifted here, potentially allowing the small screen DC Universe to expand in all sorts of intriguing directions.

Deathbolt first appeared in the pages of All-Star Squadron 23 in 1983. He’s the creation of Roy Thomas, who also gave us the Vision and Ultron in The Avengers.

Ray Palmer continues to be an effective foil to Oliver. There’s something winning about his bright-eyed belief in tech. “Super powers are based in science,” he declares. “And I am a man of science.” Those two lines honour the comic book origins of the character – along with the Silver Age Flash, the Atom was a superhero born of late ‘50s futurism rather than pseudo-magic, and it’s good to see that explicitly referenced here. Amusingly Ray sounds like a comic fan when he enthuses about the idea of a “team-up”, though Oliver controlling the Atom suit Wii style isn’t quite the classic comic book template for superpowered mash-ups…

Good to see Colton Haynes finally get some decent material (ironic if he really is leaving…). His confrontation with Lance in Iron Heights is one of many good character moments, teamed with a brutal, well-choreographed prison brawl (there’s something darkly amusing about the sight of Roy seemingly expiring beneath a sign saying “Unruly behaviour will not be tolerated”). His death and subsequent resurrection is a cool bit of stagecraft. The fact that his death is a fake-out means that Thea’s can’t be, right? Or is that what they want us to think?

Wry smirk of the week: Lance questioning Oliver’s choice in lair décor with the words “You actually put those things on display?”

Ray: “How many abandoned warehouses are in this city? I’m genuinely curious.”

No, Gantner and Yount aren’t obscure comic book creators. This is a tribute to Jim Gantner and Robin Yount, superstar baseball players on the Milwaukee Brewers team in the '80s. But Dixon Canyon has to be a nod to Green Arrow writer Chuck Dixon.

Opal City is an established metropolis in the DCU, first seen in 1994 (though a ship named the SS Opal City appears in a 1959 Superman story, fact hounds). It’s the home of Starman, Black Condor and the Elongated Man, among others.

Did You Also Spot?

Arrow is broadcast in the UK on Sky 1 HD on Thursday nights, and in the US on Wednesday nights.