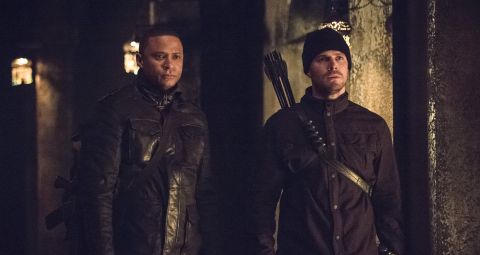 “Nanda Parbat” takes a while to kick into gear. The bulk of this episode reminds you that the show has an overload of characters just now, many of them serving exactly the same dramatic function. They’re there to be the voice of Oliver’s conscience but it’s as if that conscience has been sliced too thinly, splintered into too many pieces, frequently leaving many of the core cast underused. So it’s good to see a little of that focus restored, at last, to Dig, the original keeper of the show’s soul. He shares an effective scene with Oliver in the cell, explaining bravery in soldier’s terms, and it makes you want to see more scenes with these two, the bromance that the series was founded upon.

The assault on Nanda Parbat is a relief after so many heart-to-heart scenes, entertainingly staged as a commando raid, men-on-a-mission style. The flaming arrows are a cool touch but Oliver and Dig are captured too easily – as is Malcolm, come to that, whose desperation in the face of death seems so out-of-character that you expect it to be a ploy of some kind. Moments feel squandered elsewhere, too: I wanted there to be more fireworks in the scene where Thea confesses to Laurel that she killed Sara, though her decision to step into Nyssa’s cell at the episode’s end and hand her a knife is a powerful one.

Director of this week’s episode is Gregory Smith. He’s also an actor, with credits in the Highlander TV show, the '90s The Outer Limits and Hobo With A Shotgun.

The scenes between Felicity and Ray are just a little too self-consciously cute. Sure, there’s a romantic fizz between them that’s fun and watchable but the sheer combined charm of Brandon Routh and Emily Bett Rickards may actually be cancelling each other out. I can’t help thinking that Felicity works better as a mischievous foil for a stony-faced Oliver.

Still, we finally get to see Ray in the suit this week. It’s a good piece of design, a more tech-oriented take on the comic book version to be sure but it makes for a striking visual. It’s a pity we didn’t see him going full-Atom and miniaturising himself at the end. Let’s hope there’s more to his powers than jet boots, and the show uses him as more than a surrogate Iron Man.

First-time Arrow helmer Gregory Smith makes some good choices, swirling his camera around Ray during the Atom suit reveal and bringing a sense of movie size and spectacle to the helicopter scene, framing it against a skyline of water and neon. Let’s hope he does more.

Ra’s al Ghul’s offer of heirship to Oliver is consistent with his DCU incarnation, who has frequently attempted to persuade Batman to be his successor. He made the same offer to Bane.

Brandon Routh isn’t the first live-action incarnation of The Atom. Alfie Wise played him in 1979’s Legends Of The Superheroes while John Kassir stared in 1997’s pilot Justice League Of America.

Subtle foreshadowing alert: Ray’s wearing a shirt that’s clearly a tribute to the classic colour-scheme of the comic book Atom.

Malcolm: “John…” Diggle: “My friends call me Dig. You shouldn’t even speak to me.”

Arrow is broadcast in the UK on Sky 1 HD on Thursday nights, and in the US on Wednesday nights.