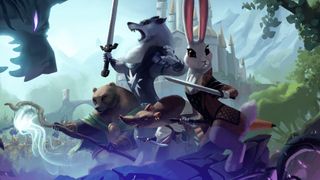 How to make a video game: take one cup Game of Thrones, two cups beautiful art, a dash of anthropomorphic animals (okay, "furries" if you prefer), and stir together with a bag full of dice. Metaphorically bake until well-done, and you have the extremely tasty Armello, a game about being the big dog (or bear, or rabbit, or rat) in a kingdom ruled by a king gone mad from supernatural corruption. PS4 and PC players have been able to dig in since September 2015, but Xbox One owners will get to join the fun this fall.

As you can see from the trailer, Armello is a board game without a board. Or rather, it's a board game that is also a video game, meaning all the pieces and components are digital. Since it doesn't physically exist, it can do things a real-life board game couldn't (or would at least struggle with), including lovely animations, a reactive soundtrack, stealth, and complex calculations handled on the fly.

Coinciding with the Xbox One launch, developer League of Geeks will be releasing the game's first paid DLC, which adds four new heroes to the mix. To clarify, the DLC is not part of the Xbox One version, it's merely launching at the same time. Now if only HBO would pick up the rights to a full-length show so we could have the dark and gritty version of Zootopia the world so desperately needs.