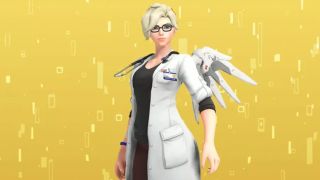 Update: Shortly after this story was published, Blizzard announced Mercy's Recall Challenge. This limited-time event will run from November 12 to December 2, giving you the chance to get eight sprays, a player icon, and the legendary Dr. Ziegler skin we knew was teased in that short story. Check out this video summarizing Mercy's Recall Challenge below.

Original Story: A new Overwatch short story has revealed an upcoming Mercy skin . "Valkyrie" is a 20-page story written by Michael Chu that centers around Mercy, aka Dr. Angela Ziegler and her time working in an Egyptian aid camp. Amongst the story's credits are Arnold Tsang, the lead character concept designer at Blizzard, whose name falls under "Dr. Mercy skin and original concepts."

The story features Mercy reflecting on her life before and during her time serving in Overwatch: she lost her parents (also doctors) in an Omnic air raid, her professional reputation was irreparably damaged after the disbanding of Overwatch, and she's still coping with the group of heroes' role in global suffering. Throughout the story are several illustrations of Mercy in hero form, including one of her arguing with Jack Morrison (Soldier 76) and another of her in her traditional Mercy outfit, saving children from fiery perils.

But the most interesting picture is on the penultimate page of "Valkyrie." It's a head-to-toe depiction of Mercy, in her typical hero stance as seen in the Overwatch game menus, clad in a lab coat, her angel wings more slight than usual. Despite her rather traditional medical uniform, she's still got on her iconic (but in this case, questionable), footwear - knee high, kitten-heeled boots. I don't want to say that I'd judge my doctor if they came in wearing a pair of these, but… if the shoe fits.

It's pretty clear that this is a preview of an upcoming Mercy skin - the artwork is more in line with Overwatch in-game designs compared to the story's more stylized images, and we know it was designed by Tsang. So, when will be getting Dr. Mercy in-game? Guess we'll have to wait and see.

Also, when will be getting Overwatch 2? Same answer as above, sorry.