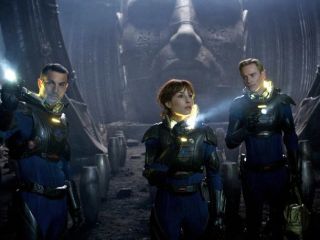 Production on Alien: Covenant is well underway in Australia. Ridley Scott is back at the helm of the Alien prequel that picks up with a new crew some years after the events of 2012's Prometheus. For this next bout of deep space terror and alien savagery there will be, of course, one familiar face: the android David, played by Michael Fassbender who has been speaking about the shoot and what we can expect from the eagerly-awaited movie.

“There are going to be great sets and aliens coming out of people," he tells Inquirer.net, which is all we wanted to know really. After Scott promised that every type of xenomorph will appear, there were concerns (well, *I* was concerned) that he'd backtrack and we'd be left with more of those half-Engineer/half-Starfish creatures from Prometheus.

As for where all of this chaos will take place, the movie finds the members of a colony ship Covenant headed to the Engineers' home planet. Upon arrival they discover a) that David's just chillin' on his lonesome and b) that there's a lot of xenomorphs. But what's it all going to look like? “The sets are fantastic. Again, the most impressive sets I’ve seen since ‘Prometheus,’ which was the original setting. It’s a fantastic mixture of high-end technology and primitive elements. The way that I can explain it is the same way that Ridley did ‘Blade Runner.’”

“You have this futuristic world where people are eating noodles," adds Fassbender, "because that seems to be the cheaper food and something that will fill you up. But it’s also something that harks back to the past. The weaving of those two things—past and future—together makes for an interesting world that we can aspire to, but also recognize something in it.”

It sounds like Scott is reverting back to the grungy "truckers in space" aesthetic that made Alien so distinctive. You've got a spaceship crew on low pay, tasked with delivering expensive goods. Now that it's been confirmed the Covenant is manned with Weyland-Yutani employees, it's pretty much guaranteed that this crew - like the Nostromo's - will be expendable.