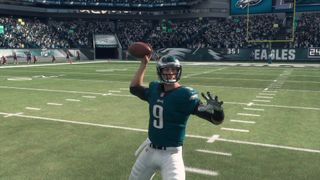 2018’s NFL Draft is over. Free agency is complete too, at least where the major movers and shakers are concerned, meaning it’s now possible to predict how all 32 NFL teams will line up next season – and, as a result, who’ll be the most exciting to play as on Madden 19’s virtual turf.

They may have gone 0-16 last season, but the dismal campaign inspired Cleveland to tear up its roster and start again. That mightn’t count for anything in reality, but on Madden’s pretend fields it means a stack of fun-looking new players. You’ve got the choice of nimble Tyrod Taylor or promising Baker Mayfield at QB; the safe hands of Jarvis Landry supplementing Josh Gordon’s speed at WR; and two physical, bruising RBs in Nick Chubb and Carlos Hyde. With youth across the board, this should be an explosive team to helm in franchise mode.

The Rams were already set to be a Madden force thanks to Jared Goff, Todd Gurley, and a deep, innovative playbook – then they grabbed monstrous defensive tackle Ndamukong Suh and elite corner Aqib Talib in free agency. Yet they’ve had to purge expensive talent such as Trumaine Johnson, Robert Quinn and Alec Ogletree as a consequence. The resulting lack of salary cap space makes them arguably the most challenging team to take on in franchise mode; but potentially the most satisfying too, if you can turn those exceptional individuals into a great team.

Two words: Lamar Jackson. Michael Vick’s outrageous speed behind center made him the most infamous Madden cheat player of all time and, going by the ratings on his Ultimate Team card, new Ravens QB Jackson has a chance to earn the title of ‘baby Vick’ this campaign. He might not even see the field in real life, with Joe Flacco still on the Ravens roster, but that shouldn’t stop him starring for Baltimore – and you – in franchise mode and online games.

The world champs are likely to be this year’s highest-rated team after lifting the Lombardi trophy, but it’s not pure cheese which leads me to recommend them. Instead it’s one of the NFL’s most creative playbooks – think back to that incredible 4th-down trick play just before half-time of the Super Bowl – and a roster demonstrating few weaknesses. The likes of Malcolm Jenkins, Michael Bennett and Chris Long mean they’ll be just as fun to control on defense as they are with the ball. In Madden terms that’s a big deal.

Farewell, Case Keenum. The team that Philadelphia despatched in last year’s NFC Championship decider also make the list thanks to what might be the best D in the NFL, with Everson Griffin, Xavier Rhodes and Anthony Barr all named to last season’s Pro Bowl. But Madden is primarily viewed as an offensive game, and the Vikes look especially strong now Kirk Cousins has been prised away from Washington and locked down as the team’s long-term QB. His Madden 18 accuracy and overall ratings of 85 should get a boost, and at 29 he has plenty of time to get even better in franchise mode.

As perennial AFC, contenders New England and Pittsburgh were both considered for this list, but the Chargers get the nod thanks to the element of surprise. Every Madden player knows what he or she is getting from Tom Brady and Ben Roethlisberger. But Phillip Rivers handing off to Melvin Gordon or slinging to Keenan Allen, behind an offensive line newly fortified by Mike Pouncey and Forrest Lamp? There’s lots to get excited about there. In both Madden and reality.

While the Cowboys just miss out on this list, third-year running back Zeke Elliott has made them highly enjoyable to control in Madden thanks to his skill moves, power and raw pace. So here’s a scary thought: Elliott ran a 4.47 second 40-yard dash at the NFL combine, but new divisional rival Saquon Barkley clocked in an at an astonishing 4.40. Matched with Eli Manning – still an elite QB in-game, even as his powers wane in real-life – the Giants should once more contend for digital glory, whatever their real-NFL fortunes.

Madden 19 is expected to be one of EA’s big E3 2018 games. While you await an official release date, be sure to check out 11 key changes Madden 19 needs to make according to fans.