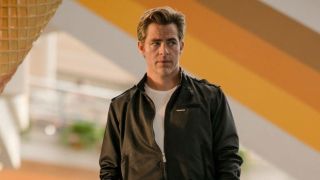 We still don’t know how Steve Trevor (Chris Pine) will return in Wonder Woman 1984. As shown by the first trailer, he’s still as fresh-faced as the day he arrived in Diana’s life in 1918 for one thing – and there’s the small matter of (spoilers) Trevor dying in the original Wonder Woman.

Strange things, then, are a-transpiring in this year’s big DC sequel and, while Pine hasn’t revealed how his character returns, he has offered a glimpse into how he’s changed since we last saw him.

“In the first movie, I played the world-weary soldier who has seen all the depravity that humankind is capable of displaying. And in this one I get to be much more wide-eyed and joyful,” Pine explained to EW.

But the glitzy and glamorous world of the ‘80s will inevitably have some effect on Trevor. And we’re not just talking about the questionable fashion choices.

He’s already been seen in clips mistaking trash cans for artwork, and that sense of naivety is mirrored in Pine’s new outline for the character, one that hints at a rekindling of his relationship with the Amazonian superhero: “My role is really just as a friend, lover, boyfriend-cum-bodyguard who’s trying his best to help Diana on her mission,” though Wonder Woman is still front-and centre, as Pine admits, “I’m like the Watson to her Holmes.”

Don’t call it a comeback – Pedro Pascal’s Maxwell Lord seems to be pulling the strings in the shadows, promising Diana the world in return for something far greater – but it’s nice to see Steve Trevor back in the flesh, even if he is wearing a fanny pack.

Plan your 2020 theater experience with our movie release dates calendar.