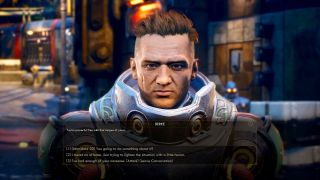 The Outer Worlds, the new first-person RPG from the studio behind Fallout: New Vegas and the Pillars of Eternity series, could be coming on August 6. That release date was briefly revealed over the weekend on the game's Steam page, along with a list of supported languages and a few other tidbits. It's since been removed, but you can still see it and a full accounting of the other changes to the page on SteamDB.

Obsidian revealed The Outer Worlds would come out sometime in 2019 at The Game Awards last year. Since then it hasn't confirmed any more specifics about when the game will arrive, but what it has showed of so far seems to indicate that it's far along in the development process. Coming out on August 6 (a Tuesday) sounds plenty feasible.

A timely release schedule for The Outer Worlds is even more likely considering the circumstances behind the game. Obsidian was purchased by Microsoft in late 2018 but The Outer Worlds is still being published for PC, PS4, and Xbox One by Private Division (an indie-focused publishing label of Take-Two). Microsoft naturally wants Obsidian to move on and start making Xbox and/or Windows 10 exclusives as soon as it can, so I'd be surprised if a "you will have all other outstanding projects completed by X date" clause wasn't part of the purchase agreement between the two companies.

The Outer Worlds looks like a fitting last hurrah for Obsidian as an independent studio, both as a spiritual successor to Fallout: New Vegas and a celebration of its unique capacity for creating original worlds. Fallout co-creators Tim Cain and Leonard Boyarsky are directing the project, and though Obsidian has been careful to note that the game won't have a massive Bethesda-style open world, it's a promising first-person RPG all its own.

Whenever it arrives, The Outer Worlds will still be one of the biggest new games 2019.