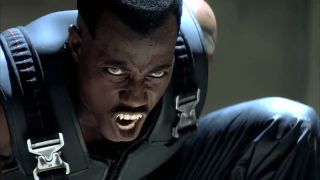 One of SDCC 2019’s best moments was undoubtedly Mahershala Ali’s surprise casting as Blade. The actor, who previously played Cottonmouth in Luke Cage, will be fighting on the side of good this time around. But what about the man he’s replacing? Blade’s iconic original actor, Wesley Snipes, has responded in turn with a heartwarming statement.

“To all the Daywalkers losing their minds right now, chillaaxx,” Snipes said in a statement acquired by ComicBook.com. “Although the news comes as a surprise, it’s ALL GOOD. Such is the ‘business’ of ‘entertainment!’ Much peace to the MCU crew - always a fan.”

So, no bad blood there – far from it. Snipes even goes as far as to pay tribute to Stan Lee, who passed away late last year, saying: “Honor and respect to the grandmaster Stan.”

Snipes, who hasn’t played the Marvel character since 2004’s Blade Trinity, also got fans’ motors running by offering up a little tease that he and Marvel “will someday work together” and, for him, “it’s not de end of de story.” Interesting…

Personally, I would have gone all-in on the vampire puns. Where was ‘Fangs for the memories’ or ‘I hope you don’t suck’? Regardless, it’s clear that Snipes has both tremendous respect for the role as well as Mahershala Ali as an actor and person. Who knows, maybe they’ll team up in the MCU down the line – Snipes passing the torch (or should that be stake?) would be a dream come true for many a Blade fan, and a fitting farewell to the OG vampire hunter.

Find out what's coming before Blade in the MCU with our essential Marvel Phase 4 round-up.