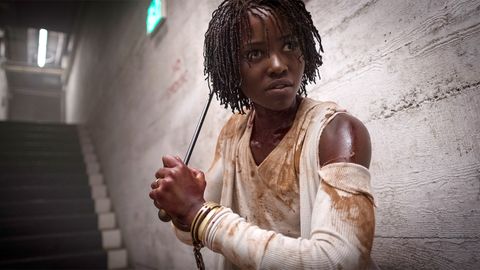 Peele doubles down on his genre love with a flawed but full-bore frightener, ripe for debate. Nyong’o is incendiary.

“Us is a horror movie,” tweeted Jordan Peele recently, lest anyone got the wrong idea and started calling it ‘elevated horror’ or some such. Two years after Get Out stirred subtexts into suspense with hypnotic dexterity, Peele’s second feature refreshes and – indeed - reveres the influences of George A Romero, John Carpenter, and Wes Craven in recognising and amplifying horror’s scope for tension and implication. True, it doesn’t quite stick the landing. But it’s a twisted funhouse blast on top and detailed enough below to reward revisits, preferably alongside its predecessor for maximum echo-chamber intrigue.

Revisits turn out to be a theme, as Lupita Nyong’o’s Adelaide Wilson returns with goofball hubby Gabe (Winston Duke) and their kids (Shahadi Wright Joseph’s Zora, Evan Alex’s Jason) to the Santa Cruz beachfront holiday spot that – as teased in the prologue – left her traumatised as a kid. We don’t find out for a while what happened in Adelaide’s past but we are alerted to a mythology involving underground tunnels and caged rabbits, establishing a Peele-iverse of echoes right away: remember the tune at the start of Get Out?

Meanwhile, Peele sharpens our focus with a packed barrage of resonant, rhyming motifs before unleashing the mother of all Michael Haneke-inspired home-invasion thrillers. Loaded nods to ’80s movies (Trading Places – ha), Jeremiah 11:11, hardcore band Black Flag’s logo and others mount beside more doubling motifs than you can wave your twin-bladed scissors at. Even a dad-gag about the internet/outernet joins in with the doubled-up fun. More pairing-up happens as the Wilsons hit the beach to join the Tylers (Elisabeth Moss, Tim Heidecker), bickering spouses/parents hitting the spirits (bet they’re doubles) hell for leather. So by the time the Wilsons are visited by a mirror-image family of four that night, your attention has been sufficiently engaged for Peele to shake the shit out of it.

The Us ending left us with a lot of questions, and a fear of scissors

And shake he does, with a taut-as-hell stranglehold on the interactions between framing, fear and feeling. It’s there in terrors glimpsed just off-centre; in static compositions that seethe with threat; and in the way he navigates the thin line between hilarity and hair-raising terror. The scene where Gabe tries to “lighten the mood” before the lights cut out shows an exquisite grasp of how conjoined horror/comedy can be in eliciting physical responses, and yet how different they are in the nature of those responses.

The cast match every tonal swing ferociously in doubled-up roles. Whether she’s quaking with primal fear as Adelaide or dishing the fear as her laser-eyed, guttural-voiced double, Nyong’o’s weapons-grade intensity owns every scene she’s in. Moss flexes strong scare-mongering muscles; Duke expands on the imposing presence and mock-macho wit he brought to Black Panther’s M’Baku; and Joseph and Alex find ways to make scary kids scary again. And unsettlingly agile.

So it’s a shame the controlled build-up stumbles on elaborate bouts of expository babble and brute-ballet violence for the climax, where Peele’s choreographic know-how isn’t met with cogency – or, at least, any kind of cogency that satisfies. Yet if some of the air is further knocked out of the film by the odd regrettably predictable revelation, the finale does, er, tether striking images to Romero-esque insinuations with layered power and purpose. It’s a film that sticks with you, leaving you hankering for another look and for Peele’s next nightmare. It is every inch a horror movie. And make no mistake: Peele has risen to take his place among the genre’s modern greats.

Love horror? Why not take a look at what we think are the best horror movies of all time, and the upcoming horror movies you should watch out for. Or watch the video below for the best scary films on Netflix right now.

Peele doubles down on his genre love with a flawed but full-bore frightener, ripe for debate. Nyong’o is incendiary.