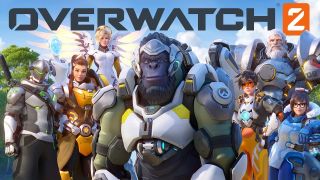 Overwatch 2 was officially announced earlier this year at Blizzard's annual BlizzCon expo, and fans of the shooter have already peppered message boards with thousands of questions about this unexpected sequel, which – for the first time – introduces a single-player campaign to complement the series' traditional focus on competitive PvP.

What we didn't know, however, was whether the sequel was going to make the jump to Switch like its predecessor, but it looks like Nintendo's on hand to put Switch fans out of their speculative misery. Don't just take my word for it, though; here, check out the gameplay trailer that's just popped up on Nintendo's official YouTube channel:

While the teaser is called "Overwatch 2 - Gameplay trailer - Nintendo Switch" don't get your hopes too high; the three-minute trailer is chiefly cinematic and builds on the franchises plentiful lore, with just a little gameplay action sprinkled in-between.

Edge Magazine recently got to speak to the man himself, Overwatch director Jeff Kaplan, about all things Overwatch 2, with the full interview published in this month's edition, issue 340, out now on store shelves.

"We're definitely going to explore what endgame means for Hero Missions,"  Kaplan explains in the interview when asked about the replay value of Overwatch 2's PvE missions. "We have many experienced developers who created content for World of Warcraft and Diablo on our team. This is one of the challenges we're very eager to start working on."

There's still no release date set for the hotly-anticipated sequel but stick with us, and we'll update you just as soon as we know more. Pinkie promise.

For more, check out our official hands-on preview with Overwatch 2 from BlizzCon 2019.