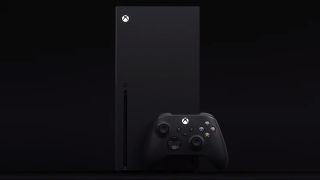 The Xbox Series X has been officially unveiled by Microsoft at this year's The Game Awards. The console formerly known as Project Scarlett got a brand new trailer which showed off the bold look of Microsoft's next-gen console. It's due out in Holiday 2020, and you can check out the wild 4K trailer below.

The actual machine is about as wide as an Xbox One controller, but will be substantially taller, think a square base but with rectangular height. Xbox's Phil Spencer told GameSpot that the team were heavily focused on finding a happy marriage between design and function: "There's always this tension between design and the kind of acoustics and cooling and function of the console," Spencer said, "and we were not going to compromise on function. I'm just incredibly impressed with the design that they came back with." According to the same story, the console will be about three times as tall as an Xbox One controller, so you might want to reconfigure your home setup.

We also know that the Xbox Series X will feature a NVMe SSD and GDDR6 memory as RAM. Partner Director of Program Management for Team Xbox, Jason Ronald, told GameSpot, "Today, we have the capability of instantly resuming the last game that you were playing. Why can't you do that for multiple games? Many players choose to play multiple games at the same time, being able to instantly jump right back where I was, those are things that we can do with the platform level to make the gaming experience better. It's really about ensuring there's less waiting and more time playing because that's ultimately what we all want to do with a with the consoles and with the services that we have."

And the controller? Well that hasn't changed much, save for the addition of a share button, a hybrid d-pad, and a slightly smaller design that will fit 98% of hands (my tiny palms are grateful). Okay that's a fair bit, and in a great bit of news, if you're planning to keep your Xbox One, Microsoft have confirmed the new pad will work with the current-gen console, as well as PCs.

As for the name, it's certainly a departure from Project Scarlett, and implies there could be more Series [Insert letter or number here] in the future. "Obviously," Spencer said, "in the name 'Series X', it gives us freedom to do other things with that name so that we can create descriptors when we need to."

The Xbox Series X is big time news, and it looks like it won't stop there. Keep an eye out on our everything we know about Xbox Series X  page for more updates as we get 'em.

Check out the GamesRadar+ first impressions of the Xbox Series X here or have a look at our making of Gears 5 mini-doc below.