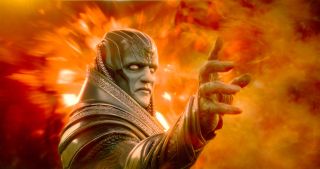 Although Warner Bros has yet to adopt the policy for their DC movies, post-credit scenes have become standard practice for Marvel and Fox's superhero films. X-Men: Apocalypse is the next 2016 comic book blockbuster on the docket, and producer Simon Kinberg offered an intriguing tease of what we can expect from the film's stinger:

"It’s a nod toward potentially a lot of different movies", Kinberg told Collider. "I mean certainly the Wolverine movie is related to what happens at the end of it, but there’s also another character that’s introduced, at least in name, in the tag and he could show up in any host of different X-Men films. Maybe a Gambit movie, maybe another X-Men movie".

From the sounds of things, whoever Kinberg is talking about is set to play a big role in the X-Men franchise going forward. Dropping a Gambit hint would be smart ahead of the character's solo film next year. Alternatively, much like Days of Future Past, the stinger could tease a villain - Mr Sinister perhaps? Whatever it ultimately is, here's hoping it proves worth sticking around for.