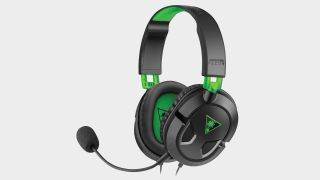 Deals ahoy! There are thousands of offers going on right now but some of the best are in the Amazon Prime Day game deals. And this is one of them. If you've been after a console gaming headset as a gift, or as a secondary one that might get a bit bashed then this Turtle Beach headset is right up your street. As part of Prime Day you can get the Recon 50X headset for just £15. I mean that's just seriously low and 'having it' pricing.

It's a versatile little headset too, being primed for both Sony's and Microsoft's consoles, and it keeps everything simple with almost zero complication. On-wire controls are nice and easy, covering master volume and mic mute. The mic is clear and receptive, and, very importantly, detachable for when you want to listen to music or watch movies. It's also incredibly light and comfortable so you'll be able to wear them for a good long while.

Turtle Beach Recon 50X gaming headset | £15 (save £15 / 50%)
This is an absurd deal for a reliable and decent headset. Turtle Beach's budget headsets won't blow you away, but they do do everything well enough for you to be confident in buying them.View Deal

It might not quite make it onto our lists of best PS4 headsets or best Xbox One headsets, but this is still a great value-busting deal. It is also one of many Amazon Prime Day game deals though, remember. So be vigilant and strong and peruse the rest of them to get a handle on what's going down at a larger scale.