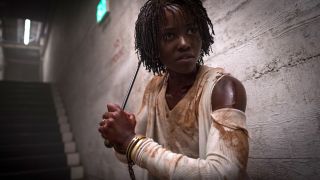 Director Jordan Peele’s follow-up to his Oscar-winning hit Get Out is another horror film with some thought-provoking subtext. In Us, an ordinary African-American family come under attack from a crazed bunch of doppelgangers, clad in red boiler suits and wielding golden scissors… But what exactly are “the Tethered”, and where do they come from?

Us is available to buy now in a host of formats: 4K Ultra HD, Blu-ray, DVD, download and on demand. Bonus features include four featurettes (including a rather good one where Jordan Peele explains some of his symbolism), six deleted scenes, and some fascinating footage of star Lupita Nyong'o staying in-character as her Tethered double in-between takes.

Thanks to Universal Pictures Home Entertainment we have five Blu-ray copies to give away – one signed by director Jordan Peele! To put your name in the hat for the chance to win one, simply answer the question below.