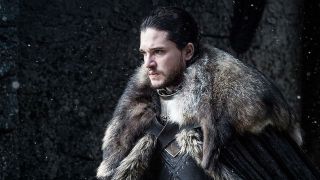 WARNING: Spoilers for Game of Thrones season 7 (specifically the finale) ahead!

When The Wall came a-tumblin' down in Game of Thrones, we all held our breath and crossed our fingers. And now, there's a hint to whether fan-favorite character Tormund Giantsbane survived the season 7 finale.

Actor Kristofer Hivju was recently spotted in Belfast, lending some credence to the idea that his character Tormund Giantsbane survived the climactic destruction of The Wall. Spotting a celebrity who's traveling might not sound like much, but Hivju just so happened to arrive in the city at the same time as other Game of Thrones cast members like Kit Harington and Emilia Clarke.

The group is gathering for a season 8 script readthrough, so methinks Hivju's presence is more than a mere coincidence.

That said, it's possible this is a fake-out. HBO president of original programming Casey Bloys admitted that showrunners Dan Weiss and David Benioff would be filming multiple endings to the season (and show, since this is the final year) in order to try and trick anyone who would spoil things too early. So could Weiss and Benioff also be requesting Hivju show up, just to keep hope alive before they dash it in the season 8 premiere?

Is there hope for Briennemund/Torienne?

Here's what Hivju himself had to say about the situation to Elle magazine in September: "I don’t know. I honestly don’t know. Somehow, I don’t believe it. Somehow, it looks like it’s a fall you can’t survive. But people have asked me if characters like Beric and Tormund die, why wouldn’t they show that? And then, in another way, it’s a horrible way to end a season, by killing two people and showing that death. So they kept it in the air. But still, I don’t know! He may be dead."

In short: if you think Tormund survived the Night King's attack on The Wall, the odds of you being right are now ever so slightly in your favor. Just don't get too sure of yourself.