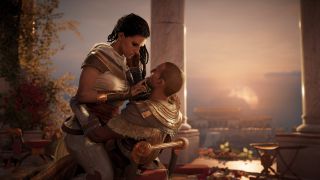 It turns out Assassin's Creed Origins has a squidgy, soft heart under all that shiny armor. Beneath the stabbing, hippo slaughter and treasure hunting is something that's pretty rare in the world of AAA games, a marriage. Bayek and Aya, the heroes of the latest installment, are actually sort of adorable. She teases him, he pulls faces to make her laugh, all while plotting the downfall of evildoers. #relationshipgoals.

"Wanting a place where we can create chemistry, where we can create drama, having that in a husband and wife relationship made sense to all of us," explains Ashraf Ismail, game director on Assassin's Creed Origins. "It was that combined with the idea that we were giving a birth to something. We romanticised the idea that the birth of something starts from a marriage."

Sat next to some giant Egyptian props in a darkened warehouse in San Francisco, Ismail says it was about making sure these protagonists were more than just "super-powered athletes that are doing crazy stuff," making sure that they were recognizable as human. Even having seen just a few hours of gaming's hottest new couple in action, it seems like the development team achieved its goals. The characters have that same mix of light and dark that makes the latest batch of Whedon-esque superhero movies such a success.

"We had the idea of Bayek and Aya being husband and wife very early, and of course it's been a lot of fun," continues Ismail. "These are two people who look at the world from slightly different perspectives, but they started from similar places and their goals are the same. What kind of friction and chemistry and drama can we create with people who have the same goals, but who look at the world differently? That was the goal, they they go on a journey together, and it's a bit of an exploration of their relationship as well. How does this relationship and all its details and chemistry, how does that lead to something bigger than them?"

We'll have to wait until October 27 to find out.