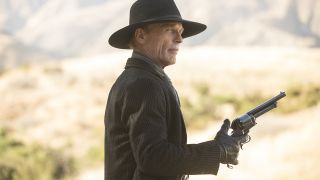 Westworld is a show like no other. Juggling an ensemble both robotic or otherwise, lore that creeps in and out of the narrative, and genuinely jaw-dropping scenery. But there’s something holding it back. Ever since that timey-wimey reveal at the climax of Westworld season 1, the show has been beset by a plague of issues surrounding the use of multiple timelines. Here’s why they need to scrap them – for the show’s own good.

Let’s rewind a bit to 2017. Westworld fan theory threads were ablaze with speculation that the events of Westworld might be taking place across two different periods of time. As it turns out, the wool was pulled over our eyes as The Man in Black was revealed to be the older, gruffer, time-worn William that we had met (or so we thought) in parallel to Ed Harris’ brooding villain.

It’s all been downhill from there. Now, critics and fans alike are more concerned with when something is happening as opposed to why. Characters are now surrogates for the time in which events happen, an empty canvas on which a year can be projected which should, apparently, count as entertaining and engaging television. Westworld is in danger of becoming nothing more than a mapped-out timeline; a collection of disparate parts that scarcely form a coherent whole; a show, ironically, trapped in its own temporal maze.

In essence, it’s a show that’s trying too hard to be clever. Twin Peaks, this ain’t. Heck, it can’t even hold a candle to Lost when it comes to scrambling brains and, yet, the show persists with presenting layers upon layers of head-scratching time jumps and endless epochal sorcery to pile on top of an already teetering cake of confusion. It’s not sustainable.

Take a look at the brilliance of Westworld season 2, episode 3, for instance, to see what should be changed. Virtu e Fortuna was one of the show’s strongest efforts yet – and easily the best since the reveal of multiple timelines. Why? Because it focused on a straightforward narrative (Dolores is going to war, Maeve is still on the hunt for her daughter) where even the timeline was given cohesion thanks to an obvious use of flashback through Bernard’s flickering memory. It works: I’m interested in both the outcome of the dangling plot threads and where the characters are heading next. I’m not spending half of my time wondering whether x is taking place before y because, honestly and truly, that doesn’t matter.

Speaking of things that are of little consequence: there’s the Tragic Tale of William Feat. Delos and Son. Ben Barnes and Jimmi Simpson are both fine actors, but their story was done and dusted in the first season. Conceivably, how many times can the show signpost ‘Westworld is a bad idea. Why, oh why are they constructing this park?!’ without outright having a Host tell us as much? It’s redundant storytelling, and one that feels superfluous in a show that already routinely runs over 55 minutes and still feels sparse in places.

William’s arc should – and must – continue with The Man in Black, whereas Delos’ takeover (which I’m sure is leading into a latter-day Ben Barnes replacement) should be consigned to off-hand remarks from the present-day players. There’s simply no need to work out the origins of a story that is already playing out before our eyes. It’d be like Spidey going toe to toe with Vulture in Spider-Man: Homecoming but having the battle split-up by another Uncle Ben retelling every two minutes.

No matter how the likes of Jonathan Nolan and Lisa Joy spin it, it’s just not fun to cut through the thicket of timelines to get to the actual good stuff. Y’know, the compelling characters, the who is/isn’t a Host, week-after-week of fantastic performances from some of the best actors around. That stuff. Can we get more of it, please?

Out of all the mysteries the show lovingly hands to us, the multiple timelines schtick – when all is said and done – will inarguably turn out to be the least interesting. What possible outcome are we hoping to get from the multiple timelines? That there’s more than one timeline? That’s already been answered. More info about Delos’ origins? Sure, but that’s not what’s driving the plot at this point. It’s an island unto itself, one that no one particularly wants to rock up to.

There’s so much more going on under the surface of Westworld that it remains baffling that we’re sticking with multiple timelines as the piece de resistance of a show brimming with bonkers theories. Yet, even the most popular theories are overtaken by the show’s preoccupation with time. Take B = T (read at your own risk in case of spoilers), it adds little to the show other than, perhaps, one small shocking scene of exposition that we’ll get down the line. In much the same way part of my rewatch of Westworld season 1 has been ruined by the fact that 40% of the intrigue can be boiled down to one sentence of a plot reveal, it adds very little and, yet, creates a disproportionate amount of chatter amongst fans. Was it worth it?

There is, however, a saving grace. That is, if the show is playing the long con and subverting our expectations. Say hello to the multiple Bernards theory. In short, it appears that there’s been more than one Bernard roaming around during the same period of Westworld. Now we’re getting somewhere.

If that’s more than one Bernard operating on the same timeline, then that opens up a whole new series of questions – and strikes right at the heart of what made Westworld so engaging to begin with. Multiple timelines, be damned. I want to hear more about this. If there are copies of Hosts then who are we watching? Can we trust anyone or anything we see? Is it all just part of one big Narrative? Suddenly, Westworld becomes special again.

If multiple timelines act as a crack in the doorway before the multiple Bernards chaos crosses the threshold then I’d be okay with that. For now, though, it’s a laborious, flabby concept that doesn’t appeal or add to the show’s core conceit. It’s Mystery Television 101, ticking all the boxes with all the effort of a lapsed high-school teacher dreaming of grander, loftier pursuits. When is not as important as everyone thinks, and when the show starts to realise that, we can all take a breath and move on.