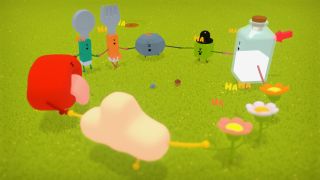 Did you ever feel a little creatively constipated? That's how Keita Takahashi, the director of Katamari Damacy, has felt for the last six years. He's been working on his next game, Wattam, since 2013, and tomorrow he will finally feel sweet relief as it's released into the world on PC and PS4. I had the chance to play through the game early, and - just like when I watched the credits roll on Katamari Damacy for the first time about 15 years ago - I had so many questions. This time, I was able to pose them directly to Takahashi himself.

Going from the best parts of making Wattam, to core questions at the heart of his games, to musical ambitions that have finally seen reality, interviewing Keita Takahashi is - unsurprisingly - a total joy. The main part of the following interview is spoiler-free (yes, Wattam does have a story to spoil), but once you've played through the game yourself, make sure you read to the very end of the Q&A!

What was the most fun you had in making Wattam?

Takahashi: The fact that I could make a game like Wattam is kind of a miracle. Making Wattam itself is a joy. I know it took six years, and I didn't expect it to be such a long time. But this is the first game I made with American people, not Japanese people, speaking English. I was thinking, maybe there will be something like a cultural barrier, different perspective issues, while developing. But there was nothing.

I don't think I have a strange perspective, but I know that people say, 'What the heck, did the creator of Katamari make a video game while drinking?' So I was a bit worried if I'd have to fight with my team. But there was nothing. They loved the idea, and they liked the game. So I'm just glad to finish this game, and I'm so glad I had the opportunity to make this game. That's it.

What are some of your favorite interactions between characters?

Takahashi: I think I like the food chain. The tree eats the people to make food, the mouth eats food to make poop, and then the tree eats the poop and turns them back to people. That's a food chain cycle we can see in our world. Also, I like the ikura sushi family story. [Editor's note: It's a sidequest where the Mayor becomes a detective by putting on a fedora and some stubble.] Even me, when I got the idea of the ikura sushi mom story, I thought 'Oh, I'm so stupid.' I just liked the idea. So I'm glad I could make that happen.

Your games play with scale a lot. Why do you find that especially fun?

But sometimes you have to step back to see all of what you're drawing, which is the macro perspective. Then you can see the proportion, the balance and the color and the light. So surprisingly, I learned the importance [of scale] from drawing that picture. Having the two perspectives, zoom in, zoom out. That is something my games have as a main mechanic.

You give players more perspective by letting them see both sides of the scale.

Takahashi: Yeah, that's also a very important tip for life. When you have trouble, it's easy to get a very narrow perspective. But if you have the opportunity to step back and see what's happening around you, maybe there's another solution.

Can you tell me about making the music for Wattam?

Takahashi: Maybe you don't know, but I tried to make an interactive music system even for Katamari. I was thinking as the katamari ball gets bigger, the music gets louder or more layered, then if you hit another object and get smaller, the music would also be silenced a little. I thought that would be fun, but the players really didn't want the katamari to get smaller. More than I thought. So it turned out the interactive music idea didn't fit to the Katamari gameplay, so I stopped trying to do that on Katamari.

Then Noby Noby... the game itself was a failure, that's OK. I tried to change the music when you stretch the body and swing. Then Wattam. When I got the idea of Wattam I thought, 'Oh, this is a game that I could really put in an interactive music system, finally!' My first thought was if every single person has different music that would be fun, because there are so many people in the game. That might be the motivation to seek other people. Then also if you connect the people [by holding hands], then their music will be mixed together and make different music, like actual life. If you collaborate with other people, you make something new.

I think the most important thing is that even when you make a group, that instrument will not be lost. Even when you make a big group with the Mayor, you can still his guitar sound. [...] I know the player will not notice that, but that's kind of my hidden theme.

What's your next project?

Takahashi: Right now I'm busy designing the physical copy of Wattam, especially the manual. The manual will be nice and silly with a comic style. Then that makes me have an interest in making a comic. Then I think after I finish all the Wattam stuff, I have to start making a new game. That's gonna take 15 or 20 years.

Spoiler warning for the ending beyond this point!

Why did you decide to make the game's climactic moment a dialog option?

Takahashi: I knew that people expected to fight with the moon, because of the last parts of the story. I think I could make a fight scene, but I didn't want to. The moon already regretted all of the things he or she did before. I just didn't want to make a video game that finished with a fight, as a game designer. But just telling the story of the moon was not enough. So I wanted something to make the player think about their life, or something that will make the player think about Wattam more deeply. Then I got the idea, 'Oh, just ask a question!' That was the first thought of the option. There's four options. Which did you pick?

Takahashi: All answers are correct, I made that answer so I understand. I know that all the answers are kind of the same - they're different, but the same. You mentioned earlier the story is about forgiveness, yeah. That is kind of the thing we need to move forward in the future, especially after the next United States presidential election.

Right now it's such a disaster. Fighting each other left and right. Even Democrats in the next election are thinking, 'How do we fill this gap between Trump supporters and Democrats? How can we forgive them? Or how do we get forgiveness from Trump supporters?' We should talk to each other more nicely, without fighting. That's enough. But I couldn't put such a direct message in the game, because it would be kind of annoying, right?

See what else is on the way with our guide to the upcoming games of 2020.