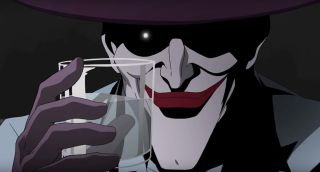 Mark Hamill was one of the premier attractions of Star Wars Celebration this past weekend, and his anecdote-filled one hour panel did not disappoint. Of course, Luke Skywalker isn't Hamill's only iconic role, and when he was asked about the highly anticipated animated film Batman: The Killing Joke - in which he will reprise his role as The Joker - Hamill took the time to placate his Bat-fans by performing some of the Clown Prince of Crime's dialogue (via Flicks and the City).

Hamill also confirms that Batman: The Killing Joke really "earns its R-rating" and is "not for kids", which is good news for fans of Alan Moore's seminal graphic novel. Some of Hamill's best voice work as The Joker has come during the character's most sadistic moments, and there will be a fair few of them in The Killing Joke. If this clip is any indication, he'll be more than up to the task.

Starring Kevin Conroy, Mark Hamill, Tara Strong, and Ray Wise, Batman: The Killing Joke will be playing in cinemas for one night only on July 25, 2016 before being released on DVD and Blu-Ray on August 2, 2016.