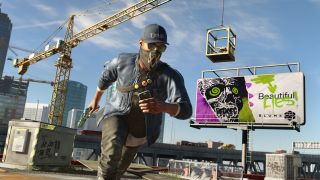 Watch Dogs 2 already had us interested with its technicolour upgrade to San Francisco and painfully cool hacking hero Marcus Holloway but the newly announced Bounty Hunter mode sounds like a lot of fun. Your version of San Fran is always connected to the wonderful world wide web, meaning plenty of interaction with other players. There's a PvP mechanic called online invasions that sees you hacking other hackers - who does hack the hackmen? - but the Bounty Hunter mode sounds the most exciting.

If you kill too many innocent civilians in your quest to take the city for Dedsec your behaviour won't go unnoticed. Up to three players will be given a Bounty Hunt with your name on it and be sent in to take you down to earn XP. Running Man-style, if you can take them out instead of dying, you'll get even more loot. In a game that already sounds like its learned a lot from the far more sombre original, it's great to see even more new ways to play in this sunny sandbox. Hipster GTA 5? I'm totally in. Check out the online trailer below.