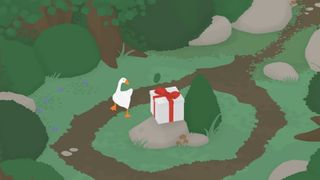 Good news, avian anarchists: Untitled Goose Game is coming to Xbox One and PS4 on December 17. The award-winning breakout game of 2019 will finally be available on the consoles, nearly three months after its initial release date. The port may have taken a while (I wonder if a naughty goose was messing with developers), but consider the holidays officially in session.

With fairly simple controls that require you to pick up objects, turn on faucets, and honk your fool head off, Untitled Goose Game will likely translate well PS4 and Xbox One. The bright colors and bold lines will probably look great on a big screen, too. And developer House House has added a fun little extra to the PS4 port: whenever your goose honks, the controller's light bar will flash orange.

This is a great holiday gift for the mischief-maker in your life - let them wreak havoc as a goose rather than in real life. Untitled Goose Game will retail for $19.99 (the same price as the Nintendo Switch versions) but will be discounted by 25% on Xbox One and PS4 for a limited time after release. Xbox Game Pass members, however, can get the game for free, as announced on the subscription service's official Twitter account.

So, PS4 is getting an orange light bar, but Xbox Game Pass is getting the game for free. Life is a series of gives and takes, but if I know one thing, it's that the Goose takes what the Goose wants, no questions asked.

Untitled Goose Game is nominated at The Game Awards 2019. Check out all the other nominees ahead of this week's awards show.