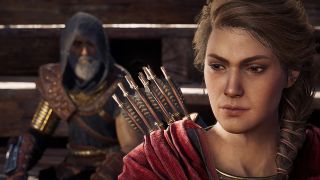 Ubisoft has pulled the plug on a number of fan-created content in Assassin's Creed Odyssey after it noticed "an increasing flow of 'farming quests'" that reportedly "exploited" the feature by offering low-challenge, high-XP encounters purely to farm XP.

Launched in June, Story Creator enables players to create - and share - their own quests for Kassandra and Alexios. Featuring detailed customisation, these player-made stories can include branching dialogue, full combat missions, and even offer XP… and therein lies the issue.

"Story Creator Mode was designed to be a tool for players to let their creativity and imagination run free as they build their very own Stories to share with others, using a modified version of the tools our own designers used to develop the quests in the game," Ubisoft said via a statement shared on the official forums (thanks, Eurogamer).

"However, since the launch of the beta we have noticed an increasing flow of 'farming quests' that exploit the tool to get large amounts of XP. These exploits risk jeopardizing the overall quality, integrity, and purpose of Story Creator Mode and results in less visibility for the creative, interesting and frankly fantastic community stories that have been published."

Consequently, Ubisoft says it's now working on a number of "fixes and adjustments" to shift "the focus back to the tool’s intended design and use". XP farming quests will now no longer appear in its automatic recommendation system - including the Hall of Fame and trending sections - and Stories reported for "exploitation or cheating" will similarly be hidden.

The developer has also updated its terms of use "to reflect the misuse of the tool" and says it will sanction those who willingly and intentionally misuse the Story Creator tool.

"We want to focus on rewarding creativity by highlighting quality quests and we are working on fixes and adjustments to reduce the impact of such farming quests on the player experience," Ubisoft added.

Some fans are unhappy at the statement and incoming changes, however, suggesting Ubisoft may have taken issue with the quests not because they jeopardise the game's quality, but instead fear the farming quests may be something of a competitor for its own monetised XP bundles.

"It’s such an obvious lie that it sickens me to this day," said one commenter on Reddit. "If they really cared about the people who lack time they could have added a XP multiplier to the settings."

"Lol. If Ubi hides and reduces the visibility of the XP farming quests, then I'll believe the 'compromised integrity of ACO' schlock," added another. "But if they outright ban the quests, then it's obvious they're just pushing their XP boosters."