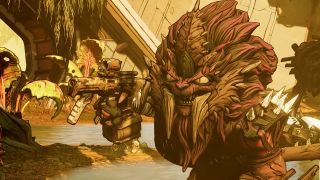 The Troy Baker v. Borderlands 3 drama isn’t showing any signs of slowing down, as Baker recently came out and said during an interview with OnlySP that he “said [he] would love to come back [but] they [Gearbox Software] said I’m not coming back”. The whole thing kicked off when Baker saw the Borderlands 3 trailer and realised that Rhys was in the game, but hadn’t been contacted about reprising his role from Tales of the Borderlands. Then Randy Pitchford claimed that Baker didn’t want to be Rhys in Borderlands 3 after his Audio Director told him the actor had turned down the role, and now Baker is fighting back saying that he wasn’t given the option.

Continuing, Baker says that Gearbox’s timeline tells an interesting story. I think it’s interesting that Randy Pitchford tweeted out that I turned it down, and then he said he heard that I turned it down. I would fact check before I tweeted out to the internet” *sips tea*. Ouch. Baker seems to be implying that Pitchford doesn’t have a handle on the facts, but we’ll have to wait and see whether Gearbox or Pitchford respond to this latest development.

Baker received almost universal acclaim for his depiction of Rhys, one of Hyperion’s employees, so fans are rallying around the actor. Not including him in the game does seem bizarre, although Pitchford has said that “Fortunately, with how Rhys appears in the game, I don’t think it actually matters at all. You’ll see for yourself when the game comes out and you may disagree with me on that or not”. Enigmatic or what? Either way I hope this gets cleared up soon, as now that we finally know we’re getting Borderlands 3 I don’t think anyone wants the game’s release to be soured by this dispute.

If you’re after more Borderlands 3 goodness, here’s our Borderlands 3 trailer breakdown with every little thing you might have missed, or look below to see our breakdown of the teaser trailer!