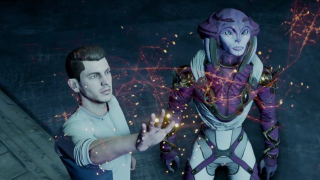 Once Mass Effect: Andromeda is out, you won't have petty things like "work" and "social outings" to blame for missing time-limited APEX missions. BioWare is rolling out a companion app for the game called APEX HQ, which lets users manage both Strike Teams and multiplayer characters from their mobile devices.

You may or may not be able to download the app yet, depending on your location and operating system. But BioWare says it should be available everywhere by March 20, the day before the game's public launch. EA Access and Origin Access members who are doing their Play First trials right now will just have to manage their Strike Teams and multiplayer loadouts from the game itself. Like plebes.

Update: iOS version of APEX HQ is starting to become available in the App Store for download! Please note it may take up to 24h to appear.March 15, 2017

If you're outside of Canada, Ireland, Romania or Singapore, don't worry - you'll have APEX HQ in your hands on March 20th!March 15, 2017

Mass Effect 3 had a companion app of its own back in the day, though it's mostly dead now. It was kind of fun getting messages from the characters and reading Codex entries. Doing missions remotely is cool too, I guess.