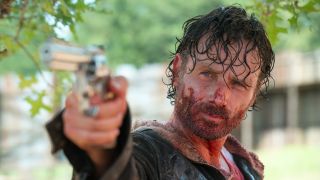 It sounds like The Walking Dead season 8 may be getting back to its horror roots. Star Andrew Lincoln told the LA Times that he's really looking forward to the next phase for Rick Grimes and the Alexandrians after the upcoming season 7 finale.

"We’re going to come out swinging," Lincoln said about the final episode for this season. "And it’s not going to stop. I’m more excited for Season 8 than I’ve ever been. I think it’s going to be big, but it’s also going to be terrifying. And I mean that from the very depths of my cynical soul."

I want to believe Lincoln here, but you'll forgive me if I roll my eyes ever so slightly. For starters, listening to someone talk about a new season of The Walking Dead is like listening to a pitch for the next Madden game; devotees will get excited, but you're gonna have to work a bit harder to sell me. Second, forgive my pointing it out, but the same was said about season 7, and yet the plot has progressed at a snail's pace. So if you're "swinging," Mr. Lincoln, you better be swinging for the fences.

Personally, I hope that Lincoln's use of the word "terrifying" implies some more zombie horror. The undead have lost a bit of their bite as the Alexandrians have learned to navigate this world, and they often take a backseat to human-on-human political squabbles. But that's just me.