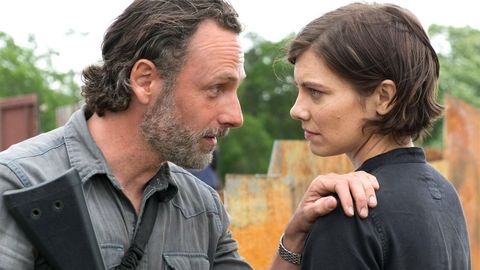 The Walking Dead season 8 never manages to redeem itself from its drawn-out, meandering storylines, despite some moments of actual potential.

I thought it would never happen, but The Walking Dead season 8 actually ended with all out war. It might be the same all out war that we’ve been promised for two seasons, but it comes as a welcome relief. To a point. Although a variety of plans and ambushes occurred, and the eventual stand off between the Saviours and Rick’s crew actually happened, it never felt quite satisfying enough. All the skirmishes between the start of The Walking Dead season 7 and throughout season 8, have taken all the oomph out of the finale.

I’ll admit that I didn’t see Eugene’s betrayal of the Saviours coming, but the Oceanside gals did turn up, just as I predicted last week, throwing Molotovs at the Saviours and managing not to burn the Hilltop to the ground. (Expert aim there.) I’m still not sure how I feel about Eugene, especially after the vomit incident and, you know, the whole near two seasons of betrayal thing, but I am glad Rosita socked him one for it all.

But the Rick vs Negan showdown was much more of a head scratcher. Ever since Negan played eenie-meenie-miney-mo with Abraham and Glenn’s lives, there’s been the promise that Rick is eventually going to kill Negan - or at least fail in the attempt. But what happens in the season 8 finale was much more anticlimactic. Despite getting slashed across the throat with a piece of glass and losing a lot of blood, Rick commands Siddiq to “save him”, much to Maggie’s disgust. Instead, Rick’s plan is to have Negan spend the rest of his life in a cell, watching as the rest of them build a peaceful life together. Although it follows closely to what happens in The Walking Dead comics, the way Negan’s ‘death’ plays out feels somewhat of a disappointment. As does the sudden change of heart that every single surviving Saviour has. Was Negan really the only reason why all of these people were on the war path, including Laura, who until now has been as hungry for Alexandrian blood as the Walkers?

8 questions I have after watching The Walking Dead season 8

Thanks to this, the season 8 finale - and to some extend the season as a whole - feels more like a set-up for season 9 than a resolution of the story. Season 8 leaves us with Maggie, Jesus, and Daryl plotting to make Rick and Michonne pay for not killing Negan, so it seems we’ve got a civil war on our hands. Is Maggie seriously going to become the villain in all this? Her motivations are understandable, but with a vision of an actual future on the horizon for the group and her unborn baby, it seems a horribly selfish and risky move. However, seeing Lauren Cohen get a storyline that she can sink her incredible acting talent into is definitely something I’m ready to see.

We’ve also got the threat of the biggest Walker herd to date, which could also contain the possibility of something way worse than Negan (according to the comics) - The Whisperers. The fact that the most interesting elements of the season 8 finale is actually a tease for season 9 just highlights the fact that the entire season has been a bit of a waste of time.

To think that the season started with the assault on the Sanctuary, where Negan and Father Gabriel ended up in that trailer, feels like a long and arduous time ago. Little has happened since then: Shiva died protecting Ezekiel, Siddiq got saved, Gregory and Eugene continued to betray the good guys, Rick’s actions made you question whether he was a good guy at all, Carl got bitten, and the helicopter teased something else entirely. So much of the season has been the overspill of the initial assault on the Saviours that what few events did take place feel drawn out and insignificant.

Introducing new characters like those offering “The Knowledge”, Jadis and the Scavengers’ entire story arc, and the death of Carl, added an air of unpredictability at least to the second half of season 8, but it wasn’t enough. The potential in breaking away from the confines of the comics was a brave move for AMC, but obviously one that it couldn’t stick to, especially when you look at just how closely Negan’s fate matches the comics.

Everything took so long to play out that any intrigue season 8 could deliver was shrouded in a mist of slog and inevitability. The season has seen so much talking, so little action, so many near misses, and so few dramatic moments that it feels like nothing of note really happened. We emerge at the end of the season deflated as viewers, discontent with the past 16 episodes. The Walking Dead season 8 finale might have wrapped up all the storylines it had with a tidy, twee little bow, but that doesn’t stop it from feeling disappointing anticlimactic. After all, these were storylines that have been bubbling along since the end of season 6, a mere two year ago. Yes, really!

Unless The Walking Dead season 9 premiere has more story and gusto than the entirety of season 8 and season 7 combined, I - along with the hordes of angry viewers still clinging on with hope of series redemption - am checking out of The Walking Dead club forever.

The Walking Dead season 8 never manages to redeem itself from its drawn-out, meandering storylines, despite some moments of actual potential.