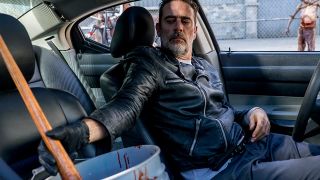 It was an action-packed instalment for The Walking Dead season 8 this week, as episode 12 - The Key - saw Rick, Dwight, Simon, and Jadis all putting Negan at a serious disadvantage, though he’s still laughing by the time the credits roll. Meanwhile a new, mysterious character introduction at Hilltop points to the show’s future in a post-Negan world, while suggesting which section of the comic books AMC is looking to adapt next.

All in all, it was another agreeable entry in this comparatively superior back-half of season 8, and another question-filled chapter that’s worth considering if you’re curious about where the show is headed. Here’s six of the biggest questions I had after watching The Walking Dead season 8, episode 12.

1. Is the Rick/Daryl bromance back for good?

A small scene positioned right at the start of the episode featured Rick and Daryl having a candid chat about their relative states of mind following Alexandria’s destruction. It only lasted a few minutes, but this was an important moment for anyone who’s been paying attention to Daryl’s behaviour this season, especially if you remember his fistfight with Rick in episode 5.

From what it sounds like, Daryl feels somewhat guilty for pushing the boat too far in his quest for vengeance, but Rick’s conciliatory tone implies that all is forgiven. This is great news all round, as the last thing Rick needs is another mini revolt, and I’m glad AMC has put the idea of a morally dubious Daryl to rest. Part of me wanted to see the pair hug it out but, of course, a mutual shrug of the shoulders was all that was needed to restore this historic friendship back to health.

First and foremost, she’s a walking, talking advert for season 9. The Negan saga of The Walking Dead is going to have to end at some point, either by the end of this season or the beginning of the next, and that means the show must reluctantly move on to new things. Readers of the comic book will note how Georgie - the well-mannered upper cruster who trades music for knowledge with Maggie - bears a lot of resemblance to Pamela Milton; the leader of The Commonwealth from Kirkman’s source material.

In the comics, The Commonwealth is a highly civilised community looking to rebuild society from the ground up, and Milton is its quixotic leader. Could season 9 be all about how Rick and the rest of the survivors recover from the war in The Commonwealth? It’s certainly starting to look that way.

Both Simon and Dwight are seriously alienated by Negan’s style of leadership, so it makes sense that their shared hostility to the big man at the top led them to abandon him with Rick and take charge of The Saviours in his stead. Of course, Dwight believes that Negan has gone too far in his treatment of Rick’s gang, whereas Simon believes he didn’t go far enough, so I’m sure it won’t be long before that tension bubbles into outward conflict between the two revolters.

Dwight certainly looked anxious at Simon’s proposal to “expunge” the enemy, and that does not bode well for the state of Hilltop and The Kingdom. Meanwhile, Negan is now aware of what happened between Simon and the Heapsters, so he’s basically a dead man walking as soon he gets back to Sanctuary.

4. Seriously, how is Negan still alive?

Let’s just run through the various threats that Negan managed to survive through this episode. First, Rick rammed his truck into Negan’s car, before completely totalling him off the side of the road. Then, covered in zombie blood (which could very easily have gone in his mouth), Negan crawls out of the wreckage and runs into a nearby building while Rick is firing his assault rifle at him the entire team. Following that, Rick throws an axe towards his head, before he falls into a zombie filled pit and loses Lucille, his only weapon.

As if that weren’t enough, Rick jumps into the pit, lights Lucille on fire, and proceeds to repeatedly whack Negan with his own weapon while zombies crowd around the pair like vultures. “I’m like a cat”, says Negan at one point, as if to humorously comment on his capacity to outlive every danger. No, Negan - cats have nine lives. You, apparently, have 99.

5. Was Negan really serious about that deal?

It wasn’t just me who heard what Negan said to Rick, right? If he lets him live, The Saviours will spare Hilltop, The Kingdom, and Alexandria from punishment, and will only ask for 25% of their produce from here on out. Better yet, Negan even promises he’ll keep Rick around, letting him work at Sanctuary in a “Janitorial” capacity, with opportunities for promotion.

Given Negan’s history, that sounds like it’s far too good to be true. Is he really that desperate, or is he just hoping Rick would buy it before going back on his word as soon as he’s safe and sound? It doesn’t really matter, because it’s not going to happen, especially now that Rick’s so dead set on killing Negan at whatever cost. I guess we’ll never know.

What's Jadis up to?

That final shot was certainly an interesting one. After escaping the clutches of Rick, Negan wakes up playing hostage to Jadis, as she’s seen driving… somewhere, but where? And how did she come across Negan in the first place? It’s not like he and Rick were fighting in any key location, so this makes me think she had been tailing The Saviours ever since they left Sanctuary.

As for her destination, my best guess is Hilltop, where she can use him as a bartering chip to gain entry inside its walls and join the team. That said, Jadis is one of the show’s least predictable characters, so we can’t say for sure until AMC gives us a definitive answer.