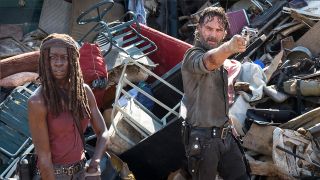 I can’t tell you how delighted I am that The Walking Dead season 8 has managed to stay consistently good for two consecutive episodes. At this point, that’s nothing short of a televisual miracle and, as a long-time viewer, it feels practically euphoric. There were bumps in the road for episode 10, for sure, but they were nothing compared to what the audience has been subjected to in the past.

With that in mind, most of the following questions I had following The Lost and the Plunderers are genuinely intriguing mysteries that conjure anticipation for next week. Normally, my questions are just various manifestations of me shouting “WHY?!” at the TV for 45 minutes. Major spoilers for The Walking Dead season 8 beyond this point, as I go through the six biggest questions I had from episode 10.

1. What does Carl’s letter to Negan say?

So far, Rick’s doing a terrible job of respecting Carl’s wishes for a better tomorrow, as he’s still provoking Negan and refusing to help people like Jadis, despite her clear vulnerability. Worst of all, though, he reads Carl’s letter to Negan without blinking an eyelid… is the man not aware of the concept of personal privacy? We catch a glimpse of a few sentences in the letter, which show Carl telling Negan he’s dead and postulating the outcome of the war, but it’s far from a detailed look.

Rick tells Negan that the letter suggests both of them stand down, but, to be honest, I’d much rather hear what Carl himself wrote down, ideally via an emotional posthumous narration from Chandler Riggs. Perhaps his prose is so touching and heartfelt that it’s enough to change Negan’s mind and redirect him on the path towards reconciliation. You can already tell that Carl’s death has impacted the guy in a big way; could a few, final written words personally addressed to him be all that’s needed to make Negan put down the barbed wire bat?

I’ll admit it, when we caught back up with Aaron and Enid at Oceanside, I burst out laughing, having just remembered that hilarious bit from last year’s mid-season finale in which the pair head to the all-female community asking for help, and instead end up accidentally killing their leader. I mean, you can’t make this stuff up (oh wait, AMC just did). Naturally, newly appointed head honcho Cyndie kicks them back out with little hesitation, but Aaron tells Enid to head back to Hilltop while he figures out a way to bring Oceanside on board in the war.

What’s the plan here, Aaron? You say that you’re not setting foot back into their camp, but the last we see of you, you’re crouching by a tree, staring into space. My best guess is a stakeout, as he waits for Cyndie to venture beyond Oceanside on her own before initiating a dialogue without the pressures of her subjects influencing the conversation with their stubborn glares of displeasure. Just please, Aaron, for the love of Carl, don’t kill anyone else.

3. Has Negan got a revolt on his hands?

The short answer here is yes and no. Simon appears to be organising his own secret, one-man revolution, having directly disobeyed Negan’s orders and killed every last Heapster in sight, before outright lying to his boss’s face to cover his tracks. He’s safe and sound for now, blood-lust satisfied, but I’d imagine as soon as Negan finds out about the Heapsters, it’s all over for poor, stupid Simon.

Alternatively, maybe Trevor Ogg’s charismatic firestarter will be the one to put a bullet in Negan’s head, making for a dramatic twist of bitter irony after all of Rick’s braggadocious promises to kill the Saviour’s supreme ruler. With Dwight officially defected, Gavin dead, and Simon on the verge of mutiny, Negan finds himself in a very tight spot indeed, and the best part is he doesn’t even know it... yet.

Bye bye Heapsters. We hardly knew ye. Also, good riddance. The whole “primitive cult” thing had already got grating by the end of season 7, so I’m not going to pretend I wasn’t slightly glad that Jadis’ chameleonic groupies got what was coming to them. Jadis, on the other hand… there’s still a path for her redemption yet.

The scene in which she made mincemeat of her former friends was all kinds of powerful, and suggests that this is a critical turnaround for her character. For a moment there, I was worried that she was about to jump into the blender with them, but it looks like AMC isn’t done with her yet. Given how much time was spent focusing on her character arc this episode, you just know she’s going to have an important role in the story from here on out. Which leads me to my next question...

5. Are the Heapsters hiding a big secret?

A small one, this, but potentially important considering last year’s big season 8 Easter egg. Remember that helicopter that flies above Rick’s head in episode 2? Or the one spotted flying behind Rick’s head in season 7, the first time he visits the Heapsters? Simon explicitly asks Jadis about “the helipad and solar panels out back” about halfway through The Lost and the Plunderers, which implies that it’s the Heapsters who have been in possession of this chopper the entire time.

Here’s my theory. Jadis is now pissed and ready to get her revenge on The Saviours, but completely outgunned… unless you assume that this heli is still hidden away somewhere. Picture this for the season 8 finale; Rick’s in trouble, everything’s exploded into heated warfare, and just as it looks like this is the end for our gang, a Deux Ex Machina arrives in the form of a combat chopper with Jadis at the helm. Prove me wrong, Walking Dead, I dare you.

6. What was up with that new format?

Right, enough is enough. For some reason, the showrunners have decided that season 8 of The Walking Dead is the place to begin stylistically experimenting with new creative formats (like that was the show’s biggest problem), but it’s not working. First, there were the slow-mo shots of everyone’s faces bookending episode 2, now The Lost and the Plunderers decides to add headers to segment different character perspectives apart from each other, as though we’re playing a Telltale game with slightly less interaction.

The problem is that this is what The Walking Dead has been doing for years anyway, regularly hopping between perspectives and characters to show various sides of the same story. Adding these headers just comes across as indulgent, off-putting, and completely unnecessary. Please stop pretending to be making something you’re not, AMC. The Walking Dead is a straightforward serial drama with zombies. It’s cheap chocolate pudding, not overpriced crème brûlée.

Hungry for more? Refresh your memory of season 8 with our Walking Dead recap of every episode so far, including last week's mid-season premiere, or check out our full review for episode 10 right here.