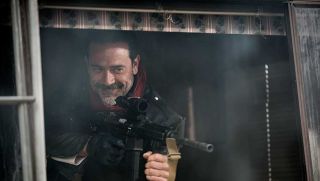 Based on the sheer volume of interviews, clips, artwork released so far, it's no secret that The Walking Dead season 7 premiere is going to completely ruin Rick's survivors. That name, 'survivors', takes on a whole new meaning in this case, because the matter of who survives Negan's brain-bashing session has kept us all totally on edge since April. We've made some educated guesses in the past as to who will perish, but it turns out that Negan's swing of the bat will in fact be a twofer. (Or perhaps a threefer.)

Here's what Jeffrey Dean Morgan told Den of Geek: “Negan’s not just going to kill one person in [the premiere]. He’s not afraid of bashing in skulls.”

From the extended four-minute clip released yesterday, we know Rick makes it. So which characters may indeed die?

Daryl and Glenn: What if both of Rick's closest, long-standing allies get bumped? Negan does go on and on in that clip about the importance of having a 'right hand man.' Daryl and Glenn fit into that category. Either of their deaths would be a blow. Both of them? This would significantly change the dynamic of the group. And, in case you hadn't spotted it, that blanket shown next to the mess of brains? Last seen around the shoulders of Daryl.

Glenn and Maggie: OK, now this would be absolutely devastating. The young couple, a beacon of hope for the future (what with Maggie bring preggers), torn down in a vulgar display of power. The episode synopsis says what Negan does will haunt those who survive forever. What's more haunting than watching a pregnant woman (yeesh, it hurts to even type this) and her husband die in such a horrific way?

Online sleuths screengrabbed that one moment from the clip - which shows the bloody aftermath - and say you can see Maggie's engagement ring in it...

Glenn and... Dwight? Yes, I've put Glenn in here again. Hey, if we're getting two characters offed, one of them has to be Glenn. End of. And let's not forget that Negan's not exactly the most sturdy of characters. He maims and kills people just to make a point: so it makes sense that he'd think nothing of killing one of his own men. In the comics Dwight winds up coming around to Rick's point of view and severing his allegiance to Negan. What if he comes to the survivors' aid sooner, tries to convince Negan to spare a life, and ends up becoming a victim of Lucille himself?

That's just me: who do you think will bite it?