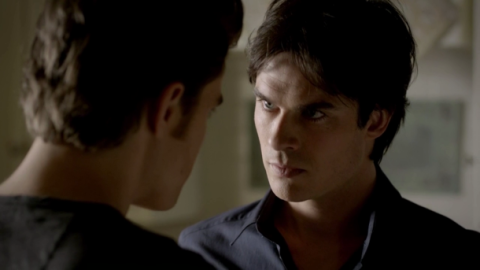 THE ONE WHERE Elena becomes a vampire and a local pastor goes a bit Waco.

VERDICT After the events of last season’s cliffhanger, the only real shock this episode could’ve delivered would have been if Elena hadn’t become a vampire (thanks to some Bonnie magic or some hastily written new piece of vampire lore). But no. Once the promise of vampire Elena has been dangled in front of the audience (and the writers) the temptation is too strong to resist. So the tension in this episode doesn’t come for “if” but rather, “how?” and the answer is, “After a lot of bickering, and not with any great fanfare.”

All credit to Nina Dobrev who acts her little heart out, trying to portray the disorientation of the transitional phase, before she drinks her first blood (from a handy expendable-minor-guest-star-shaped dispenser) and becomes a full vampire. Paul Wesley delivers a couple of motivational speeches with gusto and manages to tell Matt what we’ve all been wanting to say to him for seasons (“Stop whinging!” though in a few more words). And a particularly sulky Damon not only delivers his requisite barbed quips ( “And now the world has one more quarterback. Bravo, brother.”) but has a cracker of a confessional as well (see Best Lines below).

No, it’s the rather lacklustre approach to Elena’s imminent vampirification that’s the problem. After initially realising what’s happening to her, Elena has a brief hissfyfit, then becomes remarkably sanguine about the whole thing. Stefan and Damon keep telling us “it’s not what she would have chosen” but Elena herself is too concerned with her sudden mood swings and lust for blood to have time for any dramatic, internal conflict about her fate. Her lifechanging first drink of blood as a vampire – despite a carefully placed tear – is a humdrum affair, and it’s impossible to know what emotions she’s going through: shame? Revulsion? Orgasm? Elation? A combination? All you really get is a feeling that it’s a bit of oh, bugger but hey, life (death?) goes on. Hell, next thing, she’s sitting on a roof, nattering away to Stefan like a plucky member of the WI who’s not going to let a little thing like losing a leg get in the way of jolly good hiking expedition. It’s all so disappointingly mundane. There is, no doubt, a good story to be made about how mundane and unexciting most vampire births are, but you don’t want it to be Elena’s.

Luckily, there’s lots more to enjoy in an episode that covers an amazing amount of ground. Okay, Klaus’s resurrection and leap back into his own body is a tad easy (see below) but he still has some of the best moments, even when he’s Tyler. (Surprisingly, Michael Trevino is great as Klaus, partly because he captures the vampire’s evil playfulness, but doesn’t try to do a straight imitation and a dodgy English accent). One of the episode’s highlights has to be Klaus threatening to rip out his own heart.

Bonnie, meanwhile, has sentenced her grandmother to some kind of purgatory of pain by practising Dark Magic once too often; Rebekah goes postal and splatters Klaus’s precious Elena blood across the walls (who can blame her? The girl needs a break!); and everybody hates Matt. We’ve mentioned that already, but it's always worth mentioning again.

Oh, and then there’s psycho pastor. There isn’t a show that can’t be improved with the addition of a psycho pastor. Hell, it worked for Haven . Not sure where this guy came from, but he seems to be a major player in Mystic Falls and used to babysit Elena. Not sure whether that’s going to become important, but you can bet that we haven’t seen the last of him. Even though he’s just toasted his followers and himself in a gas explosion. He was clearly a man with a plan.

So, lots of promising new plot developments to explore this year introduced in a sufficiently entertaining season premiere. The only problem is, considering the pretty major event that happens in it, it shouldn’t have been just “sufficient”; it should have been jawdropping.

A NEW BEGINNING This is the first season premiere to not be written by either of the show’s creators, Kevin Williamson and Julie Plec.

GREAT CRASH Klaus’s rescue of Caroline involved a crash that we only witness from inside the van carrying the captured Caroline and Rebekah. This may have been to save money, but it’s very effective on screen – brutal, swift and shocking.

CONTINUITY Elena’s flashback to Damon compelling her to forget he loves her is from the season two episode “Rose”.

FIRST TOPLESS MALE OF THE EPISODE Klaus-as-Tyler, 19 mins (a surprisingly long wait… and no half-naked Damon or Stefan in a season premiere? Is that wise?)

EXPOSITION And here’s how the big, shock revelation of Klaus’s resurrection is explained in two lines .

Bonnie: “The deal we made with Tyler was that you’d leave his body and jump into someone else’s the first chance you got.”
Klaus: “Yes, when I assumed I’d be a pile of ash. But apparently fate and oxygen intervened and there I am.”

Honestly, that’s it? That’s the most perfunctory escape from the certain death since the Doctor said to the Master, “So, you escaped the Numismaton Gas!”

BEST LINES
Elena: “If it had been you at the bridge last night and not Stefan, and I begged you to save Matt…”
Damon: “I would have saved you! In a heartbeat, no question.”
Elena : “That's what I thought. And Matt would be dead because...you couldn't let go. Matt would be dead.”
Damon: “But you wouldn't be! And you would have gotten to grow up, and had the life that you wanted, the life that you deserve. And I know that I didn't use to get that, but I do now and I wanted that for you, Elena. And I would have gladly have given it to you and let Matt die because I am that selfish.”