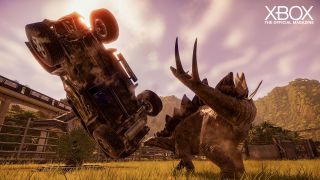 Playing I like to think of myself as someone who is pretty much immune to nostalgia. I live in the now, because that's where all the best games are. But there's something about hearing that soaring John Williams theme that immediately transports me back to doodling stegosauri in the margins of my homework. So seeing that Jurassic World Evolution, the dinosaur zoo management game based on the more recent, more rubbish movies, was getting DLC that took you back to Isla Nublar? Yup, pretty much irresistible.

The Return To Jurassic Park campaign is meant for people already familiar with the game, I suspect. Mainly because a warning message pops up telling me exactly that. Naturally, I ignore it. What could possibly go wrong? Before I find out the answer to that question, I'm introduced to the premise of the campaign. Return describes itself as a 'what if' story. Namely, 'What if we'd managed to get Jeff Goldblum, Sam Neill and Laura Dern back for a sequel?'

And it is unmistakably them – no one does halting, stresses-never-quite-falling-where-you- expect-them line delivery like Goldblum. Honestly, though, I'm more impressed by everything else. It's the Jurassic Park font! The Jeeps! Those huge gates! And, oh, the dinosaurs! Frontier has done an excellent job of extracting their DNA from amber and bringing them to virtual life. But, to paraphrase Goldblum: that's how it always starts, the oohs and ahhs. And then...

Literally 30 seconds into the game, I spot a velociraptor doing laps of the park. While the main cast calmly discuss chaos theory, the staff on the ground find themselves in rather more clear and present danger. And lo, as the man himself prophesied, there is running and screaming. Time to mobilise my rangers. It turns out I can steer the Jeep myself, which goes surprisingly well. I quickly track the raptor down, and go to ready the tranq rifle... except I don't do that. I hit the wrong button, and rename the Jeep instead. The game doesn't pause while I'm doing this, and the raptor gets away. Clever girl. Or, more accurately, stupid me.

I give in, read a few tooltips, and learn that I don't have to do this stuff manually. I can just cue up the task and let my (far more competent) staff handle it. Which is how I am taken by surprise by a Jeep bursting out of the nearby lake and starting to fire off tranq darts. It's not just the dinos who've been spliced with amphibian DNA, it seems. The raptor runs headlong at her attacker, ready for an aquatic showdown... at which point, she passes out and sinks to the bottom of the lake. Can dinosaurs drown? A menu tab informs me she has a 100 per cent comfort rating. So that's something, at least.

This is just one of the dozens of misadventures I encounter over a couple of hours playing Return To Jurassic Park. There are storms, there are escapes, there's a triceratops who comes down with the common cold. I even manage to get in a few wins here and there, like scooping our tranquilised friend up from the lake bed and airlifting her back to dino-jail. And let's be honest, I reckon that alone is enough to make me a better administrator than John Hammond ever was. At least in my park you can enjoy a nice cup of water without getting it spilled all over the place.