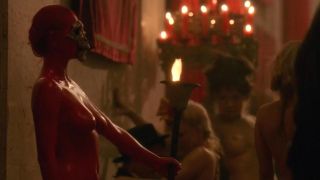 The boundaries of Westworld continue to get pushed. That's the whole point though, right? To allow visitors access to a world of untold possibility where nothing is off limits.

This weekend's episode, Contrapasso, saw Dolores escort two customers to an area of the park we'd yet to see - Pariah. A city where - alright, there's no point glossing this up - it's that part of Westworld people go to live out their sexual fantasies.

"One of the things that was important to me in is that while some of it might be kinky, it was still sensual and pleasant looking, that it wasn’t a really dark place," adds showrunner Lisa Joy. "It’s more like where you go to live out your fetishistic dreams. And part of that is seeing it through Dolores’ eyes. It’s new to her, she’s never seen things like this before, and it’s strange and scary and different for her. But for a lot of the hosts there, they were designed to act as pleasure hosts."

It makes sense that the park's creators would cultivate and hone specific hosts to cater to certain needs. After all, patrons are the sort who part with $40,000 a day to simply be in Westworld.