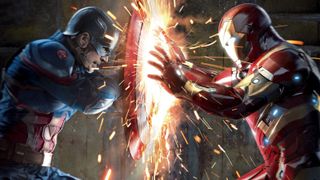 Warning: There are major spoilers for Captain America: Civil War in this feature. Go, watch it, and then come back.

It might have come out in 2016, but somehow I’m still thinking about Captain America: Civil War . I’m kinda used to Marvel upping its game with almost every new release, but there comes a point where you have to wonder, how long can it last? You can only have so many bigger and better explosions and fights before your audience loses interest (*cough* Age of Ultron *cough*), which is why Civil War is even more impressive. The action and humour is what I know and love, but there was something else that made this movie stand out. Something, distinctly not superhero-y. Something more - dare I say it - heartfelt.

Even if you haven’t seen Captain America: Civil War you know that it revolves around the friendship between Steve Rogers and Bucky Barnes. Sure, there are other issues at play, but at its core, it really is just about a friend’s inability to desert his best bud in his time of need. Take away the fact that these friends have superpowers and it’s a very human story. The same is true of the loyalties tested because of this friendship. Honestly, set Civil War in a high school and you have an emotional coming-of-age drama on par with The Breakfast Club. It’s easy to joke that Captain America and Iron Man are frenemies, but watch the movie and then come a tell me it’s about something as trivial as that.

If they gave out Oscars for performances in superhero movies (which we know they definitely don’t), Robert Downey Jr would come pretty damn close for his turn in Captain America: Civil War. I know you think I’m going crazy, but trust me when I say that he’s taken a character he’s played with ease for some time, and pushed it above and beyond anything we could have anticipated when he first took the role back in 2008. A lot has to do with the subject material. The MCU has grown beyond our wildest dreams and with that comes a necessity for the characters and stories to grow with it. This is how I got to the point where I was in the cinema watching Iron Man being torn apart (emotionally), and my eyes started to tear up. Seriously.

In effect, both sides of the Civil War fight are matters of the heart. One of friendship, the other of family. What’s that you say? No, it’s not, it’s about the government trying to make all superheroes register so they stop accidentally killing innocent people? Well, yes, that’s part of it, but even that’s got more to do with humans than it does superhumans. The whole catalyst for the Accords is the innocent people who died during the Avengers’ many battles. They might have saved the world, but that doesn’t stop them from feeling responsible, and while their powers caused the destruction, guilt is a very human emotion. No one makes this point more than Alfre Woodard in Civil War. She’s barely on screen for more than a minute, but in that time she sets up #TeamIronMan more than Tony Stark ever could. He’s not fighting Captain America because he thinks the government is right, or because he thinks Bucky is a bad guy, or even because he regrets creating Ultron. He might well believe all of those things, but he’s going up against Cap because of the mother that stood in front of him and showed him a picture of her dead son. He’s fighting because of how she made him feel.

The same is true for the rest of the Avengers. Sam Wilson (aka Falcon) doesn’t exactly trust Bucky, but he does have faith in Steve. War Machine supports Iron Man for similar reasons. Black Widow doesn’t want anyone else to suffer, but her relationship with Cap sees her switch sides at the last moment. Hawkeye, Vision, Scarlet Witch… every decision they make has everything to do with them as people and very little to do with their powers. And let’s not forget the newbies. Out of everyone, T’Challa probably has the most understandably human reason for his actions - he believes Bucky killed his father and he’s after revenge. Ok, so these human decisions escalate into a very real superhero smackdown with added Ant-Man and Spider-Man for effect but, while amazing (see above), it’s actually a very small part of the movie. And not because it only lasts 10 seconds, like another superhero fight we could mention…

It’s not just the good guys who are all about the feels in this movie. The big bad in Civil War isn’t an evil genius, he isn’t a super villain, and he's most definitely not an experiment gone wrong. He’s just a guy. Sure, he’s a guy living in the same world as Iron Man, but other than that, he’s pretty much just a regular person. In fact, we, as viewers, probably have more insight into the superheroes’ lives than he does, making us just slightly more special than the man who brought the Avengers to their knees - Zemo. How did he do it? Lasers from his eyes! No, only joking. He did what anyone would have, and used what he knew - the pain of losing the ones you love. The Avengers might have superpowers, but they’re still people and all Zemo needed to do was remind them of what they’d lost or could lose. Like Mean Girl’s Regina George he manipulated them until they turned on each other and then just watched the world burn. Something Loki, Ultron, and more have tried and failed to do, was accomplished by a guy who had lost everything and wanted the people responsible to feel the same way.

In the end, I expected the Avengers to get back together. Everyone said so. Everyone asked, what would unite them? Instead, the biggest surprise for me was that they don’t kiss and make up. While they don’t exactly end the movie ready kill each other, the relationships they’ve built over the last few movies are pretty broken, if not completely destroyed, and I get it. Punch a superhero in the face multiple times and he’ll get back up, but break his trust in you and there’s no coming back from that. The reason this Marvel movie stands out for me, is because you can take away all the flying suits, the indestructible shields, the badass fights and the epic explosions, and you will still be left staring open-mouthed at the screen wondering how the hell the Avengers are going to come back from this. Seriously, does anyone have an idea? Because it would really put my mind at ease. I'm worried.