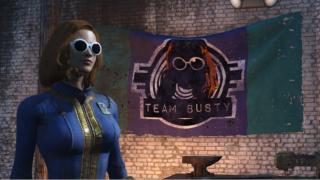 Fallout 4 mods are now live on Xbox One and it’s interesting to see what the console gamers have gone for from an almost unlimited choice of options.

Here are the most popular of all time as it stands:

Of the top three, Modern Firearms is fairly self explanatory, adding a range modern rifles and submachine guns to the game. The Unlimited Crafting Supplies Container is a cheat that gives you a box full of constantly replenishing materials. Aaand then there’s Busty EV Body Replacer which is… well, it does exactly what it says.

That’s only the most popular. Highest rated is a little more balanced with a range of gameplay fixes for recipes, weapons, mods, weather and, bizarrely, one that gets rid of the gulping sound when you drink.

And the bizarreness doesn’t stop there. If you really want to kick things off with a heavy dose of crazy then there’s Craftable Cats, letting you make pets that raise a settlement's happiness level, and Exploding Rad Chickens because why not. And don't worry, PS4 players, you'll be able to join in the explosive fun later this month.

Okay, it's an odd mix admittedly but it's really exciting to see the glorious madness of modding arrive on console. Hopefully this will set a precedent for the future - one with exploding chickens and cats.