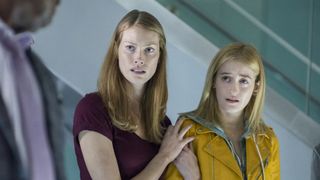 *Beware: spoilers for The Mist season 1 inside*

And it’s over. Done. Complete and probably never to be renewed again. However, if there's ever a TV series that wants - no, NEEDS - a season 2, it's The Mist, simply because story-wise it isn’t actually over. Not even close. Ending with more questions than it answers, the finale throws a tantalising and finally original idea into the foggy mix that desperately needs to be continued. Prisoners being shipped into Bridgeville to feed the nasty inside the swirling clouds? Now that I’m interested in. Why spend 10 episodes mishandling a rape plot in a mall when you could be dangling government conspiracies?

To be honest, I have no idea why I didn’t expect the ending, given that the entire show has made Game of Thrones season 7 episode 6’s pacing issues look like The Silence of the Lambs in comparison. While it’s been sprinkled with some genuine horror - leeches, rats, and horsemen have been particular highlights - few TV shows in recent memory have been such a rollercoaster when it comes to poor characterisation and narrative insanity. Ooh, and let’s throw some suggested incest in too, shall we? The finale is no different but zooming out a little, let’s take a look at the questions we still have after the first season of The Mist. And no, one of them isn’t ‘How dare someone in 2017 score a death montage to Perfect Day and still call it original?’ but it should be.

After 10 episodes, we’ve seen many sides to the creepy condensation that swirls through the streets of Bridgeville. It can make you explode into moths, make someone think they’re speaking to their dead mother, or even send the horsemen of the apocalypse to come and claim your soul with a well-placed arrow. However we’re still not much closer to working out exactly what it actually is. Despite Nathalie thinking she could predict it but still falling to its power in a frankly disturbing dead baby breast-feeding sequence - urgh, I know - this is not the wonderful force of nature she had thought. Colour me surprised.

At least the finale’s teasing last few minutes confirmed one thing; this is no natural phenomenon. An organised train of prisoners has been sent in to fuel the horror that lives in the mist, guaranteeing that at least one nefarious government agency knows exactly what the hell is going on. Arrowhead didn’t release whatever this is by accident when a cup of coffee got spilled near the big red apocalypse button. Speaking of…

2. What did Jonah do at Arrowhead?

Not only do we know that Jonah definitely worked on the Arrowhead Project, but his new narrative exposition tool, wait, I mean ‘soldier friend’ helpfully let slip that he’s high up and worked on Arrowhead for eight years. Whatever the mist is, this has been a long time in the works. Also worth noting is that apparently a doctor ‘saved’ Jonah but fittingly, our exposition tool wasn’t meant to actually answer any questions, only to tease plot threads in the final half hour of a ten episode season. Who does that when you don’t know if you’re getting a season 2? Throw in the fact that the soldiers bundled the monster child Adrian into the car with them and I’m sure there’s a jolly road trip to discover all the answers in a season that might not actually happen. Great.

3. What does that train mean for The Mist season 2?

In a perfect world where stories have endings, The Mist will get another season. It doesn’t deserve it but to finish the tale and feel like we haven’t wasted 10 hours of our lives, we really need an end to this whole sorry mess. If someone makes that call and hands the showrunners more money, the train dropping off prisoners into the mist is surely the central theme. A nice political thread emerges here. Overcrowding in prisons and the government potentially sacrificing a small Maine town for ‘the good of the country.’ I can see the secret documents being found at Arrowhead in the next season by Jonah already. They’ll be covered in classified ink and full of complex diagrams and scientific explanations for things in the mist that can swirl around you like a Mr Whippy ice cream of death.

4. Is everyone in the mall dead?

Hopefully? In a super satisfying turn of events, Kevin’s decision to kill everyone in the mall is a genuinely impressive moment of revenge in the finale, even if the results are marred somewhat by the addition of Lou Reed. Everyone we’d hated so far was seemingly mown down. The security guard by snakes, the over reacting woman crying blood, and mindless members of the mob being thrown down flights of stairs. Ironic really given the trouble that the rules on those stairs have caused. Shouldn’t have written them down and gone insane guys. I’d be intrigued if anyone survived but should anyone have made it, they’ll be gunning for one particular car of people.

The answer here is simple. Because The Mist’s showrunners didn’t want to have to deal with Jay and Alex realising that their feelings for each other means incest. It was the only way. It doesn’t matter that he was surrounded by the mist for half the length of time that Alex was, Jay had to crash and literally burn from the mouth. It’s frankly tragic that the good human being has to shuffle off the mortal coil and the hideousness that is Adrian gets to stay alive just because there was the small problem that a half brother and sister had gone rollerblading together in an apocalypse mall. Oh well. RIP Jay. You were good at saving ridiculous damsel Alex while you lasted.

6. What happens to the survivors now?

Let’s do a roll call of those who have made it to the car. We’ve got furious vengeful Kevin, Eve, smart Mia who decided to watch the train before acting rash, Officer Heisel who might not last long with the regret of attempting to murder his son at the behest of a mad woman, Alex and, last and very much least, we have gamer boy. How he has managed to survive this long no one will ever know so he’s primed for death at the beginning of next season. He’ll probably even say ‘game over’, y’know, just so we know for sure he likes games.

What exactly will happen to this motley crew will be interesting. While it would have been easy to finish with them driving into the mist and hoping for the best with the fuel that they have, the fact that we saw the train means that no one is leaving Bridgeville any time soon. This is very much ‘to be continued’ so I don’t see them just getting to the edge of town, finding a wall of mist and escaping. This lot is in it for the long haul and I’ll bet Kevin has some choice words and violence for Adrian that the show won’t want to deny us. If The Mist season 2 doesn’t happen, you can make your own decision on their odds of survival. Maybe grab a magic 8 ball? Will there be more? Don’t count on it.