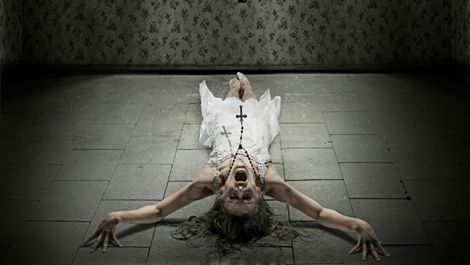 The first Last ExorcIsm (2010) was a fresh found-footage shrieker with a novel premise: a charlatan preacher, who has spent his life performing phoney exorcisms, decides to drag along a documentary crew to film one last faux-corcism on a teenage girl in rural Louisiana.

There’s just one snag: she may actually be possessed…

It was a decent switcheroo that ended with just enough ambiguity to light up horror-fan message boards.

In this equally inconclusive sequel. Nell (Ashley Bell), the first film’s beleaguered teen demon-bait, is slowly recovering from her grisly ordeal in a halfway house for wayward girls in New Orleans.

She’s doing pretty well for someone who recently escaped from a demonic cult. She’s even got a job and a love interest (Spencer Treat Clark).

During a rehabilitative exercise, when Nell is asked to write a letter to someone who hurt her, she pens a quick missive to her supernatural tormenter Abalam. In it she lets him know she is not only done with him but doesn’t believe he existed in the first place.

As Bugs Bunny might say, this means war. Suddenly the poor girl is experiencing all manner of frightful sights and sounds – half of them effective, the other half clichés from hell.

The radio and the TV crackle; the walls buckle; and at night she hangs like a little broken doll on invisible strings. Or does she?

Is Nell once again under the spell of a supernatural evil, or are these merely the visions of a disordered mind?

Luckily, the Sissy Spacek-like Bell is up to the task, fleshing Nell out into a complex, endearing character.

The Last Exorcism II is a slow burner for sure, but the finale, when Nell/Bell takes things thoroughly and gleefully over the top, makes the sometimes plodding first half worth the effort.