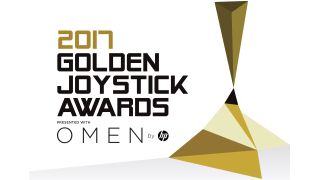 The leaves are turning colors, the air is a bit crisper, and pumpkin spice lattes are in everyone's Starbucks cup. Yes, it's that time of year again: game awards season. And the Golden Joystick Awards - the world's biggest gaming award show where the winners are determined by you, the voting public - are just about ready to reveal the list of nominees for 2017's ceremony.

Mark your calendars: the candidates and categories will be revealed this Thursday, September 21, at 4am Pacific / 12pm BST. Voting will open later that evening, and close on November 3.

This year, the Golden Joystick Awards will take place on November 17, hosted by comedian Danny Wallace (who has also voiced Shaun Hastings in the Assassin's Creed series), and sponsored by Omen by HP. If you're not familiar, Omen is HP's arm of high-power gaming PCs - they're pretty much to HP what Alienware is to Dell.

"Video games reach into people’s hearts, entertain and enthrall in a way no other entertainment medium can quite match," HP said in a press release. "We are extremely proud to be the headline sponsor of this year’s Golden Joystick Awards presented with OMEN by HP.”

Dark Souls 3 took home Ultimate Game of the Year at last year's ceremony, while Overwatch won Best Original Game and Best Multiplayer Game, and Titanfall 2 won the Critics' Choice Award. You can read a full list of the 2016 winners if you're curious or need suggestions on which games to pick up next time they're on sale (if you haven't already).