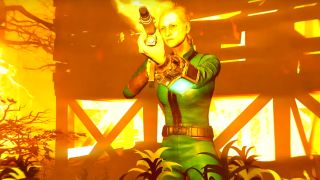 Ahead of the free Fallout 76 Wastelanders expansion coming this fall, the survival pseudo-MMO is getting multiplayer raids. As PC Gamer reports, Bethesda announced at QuakeCon that the first Fallout 76 raid will arrive on August 20, opening Vault 94 to teams of up to four players. Another raid set in a different Vault is also in the works.

Project lead Jeff Gardiner said the Vault 94 raid is "very puzzle based," but you can bet there'll be plenty of bad guys to shoot too. Like the raids in Destiny and The Division 2, Fallout 76 raids will feature multiple difficulty levels. Playing on higher difficulties will add a timer to the raid and improve the loot you receive. It sounds like there are multiple encounters to the raid, with each encounter rewarding a bit of loot and the final fight rewarding the most.

Bethesda didn't share everything the raid will dish out, but Gardiner did confirm a set of "potted plant" Power Armor, which is basically a stealthy Power Armor ghillie suit. This set of Power Armor will also provide a set bonus once you equip all of the pieces. Today's looter shooters are slowly getting more and more comfortable with Diablo 3 and MMO-style armor set bonuses, and it's encouraging to see Fallout 76 get on board.

The Vault 94 raid was designed with four players in mind, but it will be available to smaller parties. Gardiner said it's even possible to solo the raid, but that it will be extremely difficult. Extreme difficulty never stopped Destiny players from soloing raids and raid bosses, even ones thought to be impossible to handle alone, so I've little doubt that solo raiding will garner its own competitive scene in Fallout 76.

Bethesda also showed off Doom Eternal's Battlemode multiplayer mode  at QuakeCon, giving us our first look at its playable demons, power-ups, and more.