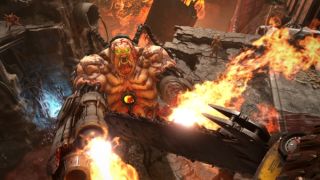 Today's QuakeCon kick-off started with the nostalgic news that the original Doom games are coming to every platform under the sun, but Doom Eternal was the biggest part of Bethesda's keynote, particularly its Battlemode multiplayer. We already knew that this asymmetrical PvPvE multiplayer mode pits two player-controlled demons against one person playing as the Slayer himself, but today was our first real look at how it works. If you want to watch the whole segment, skip to 54:40 in the Twitch embed below.

Battlemode is a 2v1 game, and as you'd expect, it ends when either the Slayer dies or both demons die. The kicker is that demons will respawn with half health 20 seconds after they die, meaning the Slayer player has to kill both of them within that time window to close out the game. The Slayer is much more mobile than the demons and has access to unique environmental tools like portals, jump pads, and monkey bars, all of which will help him chase down demons within those 20 precious seconds.

Battlemode will have six maps and five playable demons at launch, and executive producer Marty Stratton said more demons and maps will be added for free in the future. We saw a few of those demons in action today: the jetpack-equipped Revenant, the high-flying Pain Elemental, and the tanky Mancubus. We also saw teases for the Archvile and Marauder. Each demon has its own unique weapons and abilities, but there are also a few shared abilities. All demons can summon AI-controlled enemies to attack the Slayer, as well as temporarily disable the Slayer's ability to gain resources from special kills, like siphoning health on Glory Kills. The demon players can also place environmental hazards like fire traps and poison clouds on the fly.

This sounds cool on paper, but having played games like Evolve or even Destiny 2's Gambit, I'm kind of worried that having traps and demons randomly spawn behind or indeed underneath you will just be annoying from the Slayer's perspective. Even if the Slayer is stronger than the demons individually, this is still a 2v1, and adding unpredictable hazards to the mix will make it even harder to keep up with. It'll be interesting to see how all that's balanced.

If nothing else, the Slayer himself is an absolute tank. In Battlemode, you have access to every weapon and upgrade from the Doom Eternal campaign, and compared to the player-controlled demons, the Slayer has more health and deals way more damage. The demons can see the Slayer through walls, but by breaking line of sight and moving quickly, the Slayer can vanish from their vision, creating an opportunity for an ambush. This should emphasize cooperation and communication between the two demon players, both to set up attacks of their own and to report the Slayer's location. All three players can also fight for special pickups which unlock the BFG for the Slayer and the Baron of Hell summon for the demons.

There's a lot going on in Battlemode, and a lot of it does look pretty cool, but I've been burned by so many asymmetrical PvPvE modes in the past that I'm just instinctively apprehensive. While I am curious (and worried) about some matchmaking and balance elements, weird stuff like this is exciting in its own right, and Battlemode definitely looks like something I'd need to try for myself.

Here's why Doom Eternal is ditching "traditional multiplayer" in favor of a custom mode starring the Slayer.