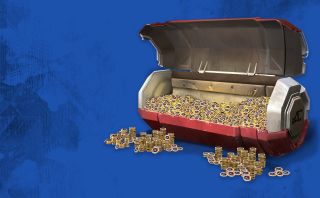 Apex Legends solos mode was finally released, albeit temporarily, as part of the new Iron Crown Collection Event. However, the bulk of the event leans heavily on the collection aspect, and more to the point, it often feels like it was priced with collectors in mind. Participating in the event itself is free, obviously, but the stylish cosmetic items it introduced come with eye-watering prices.

A normal Apex Legends pack costs 100 Apex coins, or around $1. An Iron Crown pack, meanwhile, goes for 700 coins or roughly $7, which is a pretty big markup. It doesn't help that the cosmetics obtained from these packs are unique to this event - which will end on August 27 - especially since the first Apex Legends Battle Pass was heavily criticized for a lack of compelling cosmetics.

We've seen event markups in games before, but that's just the start of Iron Crown's costs. The event introduced 24 exclusive items - 12 Epics and 12 Legendaries. You'll never receive duplicates, so to get all 24 items, you'd need to open 24 Iron Crown packs. You can earn two free packs - and only two - by completing challenges, bringing the cost down to 22 packs or 15,400 coins. If you take the most efficient route and buy coins in bulk, this would cost you $140.

There are two sticking points here. Firstly, none of the items in the Iron Crown packs are available for direct purchase, so if you just want one specific skin, there's no telling how many packs you'll need to buy. A normal high-end Apex Legends skin costs $18, but if you get unlucky, you could end up spending way more than that on Iron Crown packs. It's classic loot box hell, and it feels bad - doubly so since more and more games are steadily weaning off loot boxes as the industry as a whole pushes for transparency.

Secondly, and quite ironically, the only Iron Crown item that is available for direct purchase is locked behind all 24 of these loot boxes. That would be the new Heirloom item, Bloodhound's Raven's Bite axe. You can only purchase this Heirloom once you obtain all 24 loot box-exclusive Iron Crown items, and the axe itself goes for a whopping 3,500 coins. If you wanted to get absolutely everything the Iron Crown has to offer, assuming you get your two free packs, you'd need to spend 18,900 coins, which is almost exactly $170 if you buy coins in bulk.

For comparison, Wraith's Heirloom kunai can cost several hundred dollars. It can drop from any normal Apex pack - though the odds are south of 1% - and it's guaranteed to drop on your 500th pack if you don't receive it before then. You can also earn up to 45 normal packs just by playing. So I suppose you could argue that paying $170 to guarantee Bloodhound's heirloom is a bargain compared to Wraith's, but only comparatively, and that doesn't change the fact that we're talking about virtual melee weapons locked behind a pricy game of cyberspace Yahtzee. Besides, once Iron Crown is over, Bloodhound's Heirloom will be added into the same loot pool as Wraith's, so that argument doesn't really get us anywhere.

In any case, the player response to the Iron Crown event hasn't been, uh, great. By which I mean, at the time of writing, nearly all of the top-voted posts on the Apex Legends subreddit are criticizing or satirizing the event's pricing. I wouldn't expect Respawn or EA to make any changes during this event, but given the scale and intensity of the backlash, this may well affect how future events and cosmetics are handled.