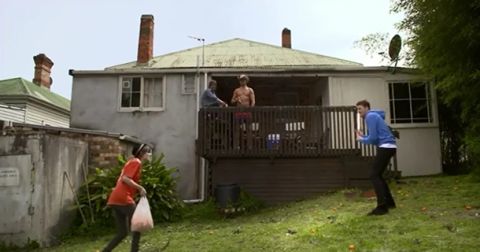 THE ONE WHERE Agnetha starts to meddle in the Johnson’s affairs, Loki is up to mischief and Mike has to use his powers to get Axl out of a tight spot which ends up with him owning a bar.

VERDICT After a rather bland opening episode last week The Almighty Johnsons completely fails to move up a gear in this second episode. Yes, there are some good scenes and a few interesting plots afoot, but the episode seems to go by very quickly without much actually happening. It’s not bad exactly; it just all feels a bit inconsequential.

As she was the big bad from last year, Agnetha’s attempts to bond with the boys – and especially Axl – is highly suspicious considering she’s aiming at the same goal she was when she was the baddie. She just seems to be messing with them all for her own gain and no matter what she’s up to you can bet it won’t be fun for the brothers. At least Mike still doesn’t trust her.

Loki’s tactic of trying to talk Axl into continuing the quest for The Frigg, then trying to get him in trouble followed by telling Olaf and Mike that they should all just give up on the quest is very convoluted. But he is Loki the trickster, so it’s all in character. Whatever his plan is, he’s still one of the most amusing characters in the show; one of the stand-out scenes this week was Loki, as a guest college lecturer, giving his bleak vision of the future job prospects for the students in Axl’s construction class.

Jared Turner’s Ty is still rocking the drugged-up lover/Dexter the serial killer vibe over the Eva relationship. It’s nice to see him away from Eva this episode and spending some time with Dawn, even if it is a bit snippy and argumentative. He’s her lobster. As soon as he’s back in Eva’s sights it’s all crazy again and they end up branding each other with a red hot cattle poker. We’ve seen relationships like this before; it can’t end well.

Axl’s confusion over all the conflicting advice everybody is giving him about his destiny and The Frigg is getting a bit repetitive already. We know the search for The Frigg is the overriding plot of this show but they do seem to repeat themselves a lot and nobody really knows anything.

So, this week we have a few changes of circumstance: Mike has a bar now and he seems to be preparing to moving out of Zeb and Axl’s house which makes room for the return of Gaia, but apart from that not much happens. The return of Gaia should shake things up again. She’s probably going to end up being The Frigg isn’t she?

With Mike winning the bar from Loki this week, The Almighty Johnsons takes another step on the road to full on soap opera. Neighbours had Lassiters, EastEnders has the Queen Vic and now our unruly Norse Gods have somewhere to go too.

BAD CGI Loki’s at it again with the fire. Not quite as bad as last week but still. At least they use real fire later on.

BEST GOD Mike, God of games, proves his worth by beating Zeb at chess while blindfolded and then later wins a bar from Loki. We think blindfolded drinking chess should have been in the Olympics.

OLAF GETS HIS KIT OFF Grandpa Olaf is seen sans shirt twice this week. First as he watches Axl’s “God School” session and later he whips off his shirt to put out a burning Mike. After wandering around with no shirt on twice last week we wonder if there’s a “Moob exposure” clause in actor Ben Barrington’s contract.

QUESTION OF THE WEEK Does Mike winning the bar mean that Axl now owes him the three grand bar tab?

The Almighty Johnsons airs Mondays at 10pm on SyFy