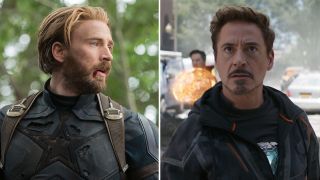 Avengers: Infinity War tried its level best, but it couldn’t fit everything in. From first drafts consigned to the scrapheap to misdirection in trailers, there was a lot that didn’t quite make it into the final cut. Could it have made a great movie even better? You be the judge. I’ll be here silently sobbing over missing out on Cap meeting up with Tony Stark. Unless we get that in Avengers 4, that is.

Cap and Iron Man were meant to reunite

As revealed during a chat on Yahoo with writers Christopher Markus and Stephen McFeely, the “first wonky draft” had Cap and Iron Man in the same room hashing things out. However, that ultimately led to hitting the brakes on Thanos’ big Stones-grab. Which was a big no-no. A story for another day, perhaps?

Another tidbit from Markus and McFeely, and another moment cut from an early draft. Spider-Man and Falcon essentially would’ve had their roles reversed if a proto-version of Infinity War made it to the big screen. Falcon would’ve been in space; Spidey in Wakanda – and we would’ve missed out on that heartbreaking Tony Stark scene.

We were meant to see how Thanos got the Power Stone

Remember that throwaway line about Xandar? Thanos’s first stop on the way to completing the Infinity Gauntlet was pretty much glossed over by the time we met him. That was probably for the best according to Stephen McFeely, as it made the movie “unwieldy”.

Now off to the Russo brothers, who told ComicBook.com that there’s a deleted Guardians scene out there somewhere that didn’t quite make it into the final cut. Not much has been revealed about it, save for the fact that it takes place after Thanos takes Gamora from Knowhere and that it’s pretty absurd. One for the deleted scenes, methinks.

There was a giant green hole burning in the back of our brains throughout Infinity War’s final act: where was Hulk? He was shown being primed for battle in Wakanda, but he was nowhere to be seen. As director Joe Russo hinted at on the Happy Sad Confused Podcast, it was all smoke and mirrors to get the desired reaction for that specific trailer: “So, at our disposal are lots of different shots that aren’t in the movie that we can manipulate through CG to tell a story that we want to tell specifically for the purpose of the trailer and not for the film,” Russo reveals.

Even the stuff that did make it into Avengers 3 made our heads (and hearts) hurt. Here’s everything you need to know about the Avengers: Infinity War ending, and what it means for the future of the MCU.