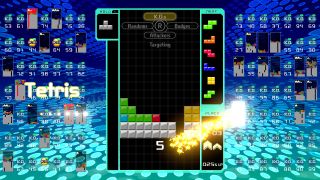 Tetris 99 has expanded with a new mode that lets you squad with friends and strangers to take on other teams.

#Tetris99 adds Team Battle Mode with the Ver 2.1.0 update, available now! Choose one of 4 teams & compete to be the last squad standing! Also in this update are new button config options, user emblems, & an option to redeem 4 themes from past MAXIMUS CUP events. @Tetris_Official pic.twitter.com/azNifSZS44December 11, 2019

The way the new Team Battle Mode works is fairly simple; you'll join one of four teams to join at the outset of each match and battle it out as usual with a squad by your side. The last team standing with at least one player remaining wins. Fallen squad members can spectate the remainder of the match and send out "likes" to support their team, and they'll need to stick around if they want their precious XP.

Team Battle Mode was added to Tetris 99 as part of a big update that also adds "new button configuration options and new user emblems, as well as the option to redeem 30 in-game tickets for some of the elusive Special Themes that were featured during earlier events." The new themes from previous special events include Fire Emblem: Three Houses, Splatoon, Super Kirby Clash, and the original Gameboy Tetris.

Tetris 99 is free to anyone with a Switch Online subscription, or you can purchase a physical bundle that includes the game, all currently-available DLC, and a 12-month subscription to Switch Online for $30/£22.

Find out where Tetris 99 ranked on our list of the Best Nintendo Switch games to play right now.