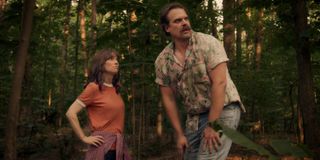 Warning: this article contains major spoilers regarding Stranger Things 3, including the fate of a main character, the nature and motives of the season’s villains, and the contents of the finale.

Please don’t read any further if you haven’t watched Stranger Things 3 and want to avoid spoilers. Bookmark this page and come back when you have finished the Netflix show!

Stranger Things 3 brought us a dollop of gore, lots of rewarding relationships between our heroes, a glorious neon-tinged colour palette, and a highly charged, emotional finale.

It wasn’t over when the credits rolled, though. With hardly any time to dry our tears following the death of Hopper, and even less time to comprehend how our gang of resourceful Hawkins residents will never be the same again, a teasing post-credits sting began to play.

The scene takes place in a gigantic military facility in Kamchatka, the remotest of remote peninsulas in far-eastern Russia. An officer approaches a cell and is stopped by his superior, who says: “No, not the American”. Instead, he opens the next cell and drags a Russian out, leading the prisoner down a staircase into a deep pit before throwing him kicking and screaming into a blood-soaked cage. A hatch opens up, revealing the terrifying monster from seasons 1 and 2, the Demogorgon, who presumably proceeds to eat the poor Russian victim.

This scene could be key to understanding two main questions from season 3:

A: Why the hell are the Russians trying to open up an interdimensional portal in small-town America?

B: Is Hopper really dead?

Let’s start with the first question. What in tarnation are the Russians doing in Stranger Things 3? They’re clearly not trying to get into the Upside Down for the sheer academic curiosity of it (the machine guns are kind of a giveaway on that). To start answering this question, we need to look back at the opening scene of this season.

As detailed in our guide to Stranger Things 3’s many, many Easter eggs, the opening scene takes place in summer 1984 and shows Russian scientists and military personnel trying to open up an interdimensional portal using a gigantic laser-like machine. While the attempt fails that time around, the stage is set for further attempts. But why?

That same summer in 1984, the film Red Dawn came out. And what is Red Dawn about? Yep - Russians invading a small town in the American Midwest. As the season unfolds, more details are revealed.

Through insidious real-estate dealings, Russians have managed to install an entire underground base directly underneath Starcourt Mall, a brand-new shopping centre in Hawkins, Indiana. Filled with colourful distractions, famous American brand names, music, movies, sugary treats of all kinds (most importantly Scoops Ahoy ice cream) and Jazzercise classes, the shoppers are blissfully unaware of the nefarious plans going on directly underneath their feet.

Later on, we also learn that they have previously attempted to open this portal from other potential openings in Russia, to no avail. As Hawkins is “the source”, as explained by our precious friend Alexei, the head scientist kidnapped by Hopper and Joyce Byers, the Russians decided they had to go to Hawkins to succeed.

But are the Russians trying to invade America through the Upside Down? It would be a risky proposition in the first place, and a tricky logic puzzle to solve too, even by the outlandish standards of Stranger Things. Or, perhaps the Russians are trying to open up a portal to let the monsters tear the town apart? And, following that, maybe they hope the beasts lay waste to the entire United States without ever sending in their own army?

The Demogorgon in the credits scene could even be a Russian creation, bred and cultivated to kill, devour and destroy. And if not their creation, the monster is at least being weaponised by them. Hell, there are enough Alien references in season 3 to slot the Demogorgon into the Xenomorph’s role here; a terrifying, remorseless killing machine from another world is caught with the aim of using it as a weapon.

However, this theory hinges on several big ifs.

Why would they originally have tried to open the portal from the Russian side, if the goal was to invade the United States? To get the Demogorgon from Kamchatka – which is almost as far away from anything as any place on Earth can be – to Hawkins means they would have to be able to access the Upside Down from the Russian side and get it from there to the American opening. To believe that, we’d also have to believe Alexei was either lying or misinformed when he said the Russians hadn’t managed to open the portal from the Russian side. Judging by his disarming honesty throughout the show, we can discard lying right off the bat. Misinformation? Well, the jury’s still out.

This theory would also mean the Russians were possibly somehow responsible for, or in control of, the Mind Flayer, and the frightening monster it built out of our unlucky Hawkins residents (both rat and human ones). And if not, they were ready to risk unleashing an alien weapon of mass destruction on their enemy in hope it wouldn’t literally swim over to Russia after running out of victims and eventually destroy them too.

Another possibility is that they want to open the portal for mere surveillance; an interdimensional spyglass aimed at their enemy. To that purpose, they could use someone with psychic powers, like Eleven has, to collect intel through the portal, to prepare for what would perhaps eventually be a more conventional attack on the United States.

What keeps this wild theory alive, though, is that single line in the credits sting, the one that gave us viewers a glimmer of hope through our teary eyes as we mourned for Hopper.

In a series so densely woven, so purposefully scripted, this line has immense significance.

Yes, there is a chance this might be a new character. But, then again, there's a chance that behind that door there's a familiar face.

It could be Matthew Modine’s Martin Brenner, even though his demise was rather heavily implied in the season 2 finale. As the scientist responsible for originally opening the gate, and who has direct links to Eleven, he could be brought back. The return of Paul Reiser’s Dr Owens at the end of the third season could herald a more direct tie-in with the Americans’ original plans with the portal.

It could even be – and whisper it – Barb. Yes, we saw her body in the Upside Down in season 2, but we also saw two Billys Spider-Man-memeing each other in season 3. We saw a lot of things in the Upside Down. The objective reliability of anything shown to us there is almost non-existent. However, bringing her back would feel like redundant fan service, and as tragic as her demise was, it was necessary for our heroes’ character development. Undoing that would do the show a disservice.

That essentially leaves Hopper. But didn’t he get killed in a giant blue explosion? Well. Let’s revisit the opening scene again.

In the season’s opening sting, the giant dimension-cracking machine malfunctions, killing a number of Russian soldiers, gruesomely and dramatically. However, the Duffer brothers make a point of showing us their disintegrated remains on the facility’s floor. We never see any remains of Hopper, even though we spend considerable time in the machine hall after the explosion. Not a body, not a puddle of goo, not a speck of dust. Nothing. This feels intentional.

Hopper being alive would certainly set up a fascinating fourth season. While Eleven seems to have lost her psychic and telekinetic abilities at the end of the third season, her regaining them is definitely on the table, and once she did, her sensing Hopper’s consciousness is squarely within the realms of reason. Cue a perilous rescue mission, possibly all the way to Russia.

If all that turns out to be the case, there is still one Hellboy-sized question that remains: how in the heck did Hopper, who seemingly perished half a mile underneath a mall in Indiana, USA, end up in a cell in Kamchatka, Russia? It’s inconceivable. Unless that portal has another door...

Want more Stranger Things in your life? Be sure to read sister site SFX's big interview with Millie Bobby Brown.