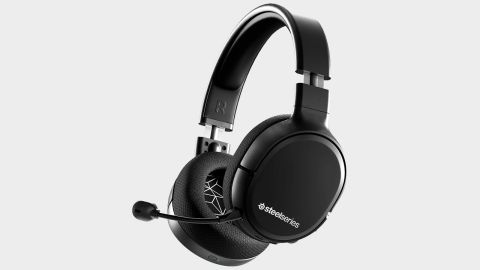 A headset for all occasions and devices, the SteelSeries Arctis 1 Wireless is ideal for someone who plays games on multiple devices and needs a commute-friendly headset

When it comes to gaming headsets for PC and PS4, the market is somewhat saturated. From budget options that do the bare minimum to high-end devices with all sorts of customisation options built for competitive gaming, there's a plethora of devices to choose from. But what if you throw the Nintendo Switch into the mix? Wireless headsets are few and far between for the Switch due to the lack of Bluetooth functionality with audio devices, so to make wireless headsets work, you need to invest in a USB-C dongle. The SteelSeries Arctis 1 Wireless skips that step by including one from the off, so could that be an early sign that it might be one of the the best Nintendo Switch headsets going?

SteelSeries is a reputable brand known for their top quality products, but how does the Arctis 1 Wireless compare when it comes to design and build quality? The design is fairly minimalist, with relatively thin cushions on each earcup and a sleek headband across the top. A matte black colour all over keeps it from looking too over the top like many gaming-focused headsets tend to. The result is a lightweight, comfortable headset that just feels like it could easily be worn for hours on end.

Thanks to the detachable mic, you can take the device out in public without immediately drawing attention to the fact you're wearing something built for gaming. On the underside of the left earcup is where you'll find the micro USB charging port, a 3.5mm aux if you want to use the headset wired, a volume wheel, and a simple mic mute toggle. Under the right earcup is the power button and an LED to let you know what level the battery is at. Simple but clear.

Alongside the headset, in the box is where the magic happens, because you're provided with a USB-C adapter - and a USB-to-USB-C cable if your system doesn't support USB-C already. Since the SteelSeries Arctis 1 Wireless doesn't utilise bluetooth to maintain that Nintendo Switch compatibility, this adapter will be wirelessly paired to your headset out of the box.

The features mainly reside in the headset's design, as mentioned above, but the biggest other is the battery life. It being wireless, this is key, naturally. Leave it to charge overnight and you'll be met with almost 20 hours of battery, that'll easily serve you well for a weekend of solid gaming. And all you need to do is keep an eye on the LED colour to ensure you know when it needs charging again.

While the Arctis 1 Wireless only works with Nintendo Switch, PS4, PC, and Android wirelessly, you can use the device wired with any product that features a 3.5mm audio jack. This includes the Xbox One, older models of iPhone, and more. Unfortunately, there's no lightning adapter so those with recent iPhones are out of luck.

If you're gaming on PC, you can take things up a notch in terms of usage and customisation with the SteelSeries Engine software. This app allows you to customise all of your SteelSeries products, and when it comes to headsets, you can adjust the equaliser and select different presets depending on your preferences, and the games you're playing. Installing and using your headset in conjunction with the Engine also allows for multi-functionality with the power button, allowing you to play/pause your music and skip tracks when listening to music, for example.

On Nintendo Switch, there is truly nothing better; the USB-C adapter slots nicely into the bottom of the device and the audio quality is as good as you're going to get from the Switch. It's the perfect device to stop bugging your family as you play on the sofa and listen to Mario's dulcet tones in Super Mario Odyssey or the ominous chanting in every Pokemon Sword and Shield gym battle.

As someone who loves competitive multiplayer games on both PC and PS4, the SteelSeries Arctis 1 Wireless unfortunately falls slightly flat due to only having stereo and not surround sound. After playing a number of hours across Call of Duty: Modern Warfare, PUBG, and Escape From Tarkov, it simply doesn't have the audio reach to listen out for footsteps and identify the direction of gunshots as well as I'd like - and as well as you'd expect from a $100 / £100 headset, truth be told.

With that said, after using it for The Division 2 and Star Wars Battlefront 2 on PS4, it does the job for those more casual games. Nothing sounds incredible, but everything is clear and crisp. The same goes for music; it's fine, but if you're used to using something better - with greater range, depth and richness - then the drop in quality is noticeable.

The SteelSeries Arctis 1 Wireless is one of the most versatile headsets going - it's audio quality combined with its connectivity and compatibility with multiple devices ensure this is its core strength. While it won't be adequate for players who love to play games competitively, or those who only crave the highest audio fidelity, it is the ideal solution for those looking for a catch-all headset that they can use with multiple devices wirelessly. Thanks to the USB-C wireless dongle, it's a great device to take on any trips as it works with everything from my MacBook Pro to my Nintendo Switch; you just need to ensure you have some AirPods, or similar, to use with an iPhone.

For most people, the Arctis 1 Wireless will have all the bases covered as it excels at everything necessary. Just don't expect to be blown away by the quality and range or expect overall audio excellence. While £100 may seem like a lofty price for some, the SteelSeries name ensures you're paying for quality. Its USP of being a top-performer for the Nintendo Switch means that if you're looking for something to use with your Switch, that keeps you tether-free, then nothing will surpass this.

A headset for all occasions and devices, the SteelSeries Arctis 1 Wireless is ideal for someone who plays games on multiple devices and needs a commute-friendly headset