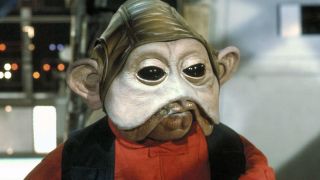 Star Wars: The Rise of Skywalker featured several big-name deaths – but one Original Trilogy character sadly met his end off-screen. That’s according to the writer of the movie’s official novelisation, who confirmed the casualty on Twitter.

Spoilers for Star Wars: The Rise of Skywalker follow…

You might want to sit down for this. Nien Nunb, the smuggler-turned-pilot who helped the Resistance in Return of the Jedi, as well as appearing in Star Wars: The Force Awakens and in the Battle of Crait in The Last Jedi, perished during the final battle on Exegol.

The bug-eyed hotshot was part of the hundred-strong fleet of ships that arrived to save the day on the hidden world of the Sith. But he was shot down in a blink-and-you’ll-miss-it scene amid all the chaos in The Rise of Skywalker’s final act.

It was first pointed out by writer Bryan Young (H/T Digital Spy), and confirmed by novelist Rae Carson, who said, “I think it's pretty clear from the movie (upon careful watching), so I feel comfortable confirming. Props to you for noticing!”

Yeah, I think it's pretty clear from the movie (upon careful watching), so I feel comfortable confirming. Props to you for noticing!January 6, 2020

Well, that sucks. But there are small mercies: we could potentially be getting a fuller, richer look at the dogfight to end all dogfights on Exegol, including (hopefully) a brief moment of reflection on one of the most unique-looking characters in the galaxy. The official Rise of Skywalker novelisation promises “expanded scenes and additional content not seen in theaters.”

Those calling for a Rise of Skywalker director’s cut – such as actor Dominic Monaghan – may want to snag a copy upon release on March 4.

Relive the entire story in a galaxy far, far away with our complete Star Wars timeline.