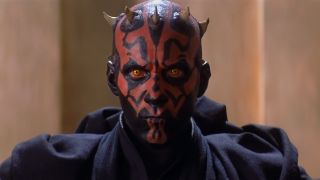 When Star Wars: The Phantom Menace first reached cinemas back in 1999, there was jubilation around the world. A new Star Wars movie! A young Darth Vader! Lightsabers! George Lucas back in the directing chair for the first time since 1977!

Oh what, joyous times. And, despite what you're likely thinking, critics at the time were just as excited as the fans, giving the movie a flurry of positive reviews. "One of the most deliriously inventive movies to have appeared in years," writes one reviewer. Another calls Jar Jar Binks a "scene-stealer".

Time, of course, has been less kind to The Phantom Menace, with Episode 1 often being viewed as one of the worst instalments in the Skywalker saga. With Star Wars: The Rise of Skywalker reaching cinemas momentarily, there's never been a better time to look back at the first reviews for Star Wars: The Phantom Menace. (Yes, before you ask, our sister publications SFX and Total Film both feature below...)

Our very own SFX magazine: "The film is undeniably spectacular: droid armies, thriving cities, and more alien races than the mind could ever process during a single viewing. There are some truly amazing visuals in the movie that blow away anything that any other filmmaker has ever attempted."

Andrew O'Hagan writes for The Telegraph: "The Phantom Menace is probably one of the most deliriously inventive films to have appeared in years: it displays all of George Lucas's uncommon magic, a wide-eyed genius for adventure narrative that is beyond any ordinary capacity for wonder, and in many respects the latest episode proves itself to be a more finished movie than any of the others. It is daring and beautiful, terrifying and pompous and that's just the title sequence."

Danny Graydon writes for BBC: "By no means the feared anti-climactic disappointment, Episode 1 vitally succeeds in holding its own against the legions of blockbusters Star Wars was responsible for. It's an often deliriously exciting adventure, hitting the target audience of 10-year olds and satisfying long-time fans, providing the pop culture analysis is discarded."

"Displays one dazzling visual after another"

The Hollywood Reporter writes: "Lucas and his crew at Industrial Light an Magic have outdone themselves in production design and special effects. Nearly every shot contains a complicated computer-generated effect, supplemented by the usual model work. The film displays one dazzling visual after another, from what seem like hundreds of types of photorealistic creatures to a multitude of elaborate scenic designs."

Janet Maslin for The New York Times: "Stripped of hype and breathless expectations, Mr. Lucas's first installment offers a happy surprise: it's up to snuff. It sustains the gee-whiz spirit of the series and offers a swashbuckling extragalactic getaway, creating illusions that are even more plausible than the kitchen-raiding raptors of Jurassic Park."

Peter Travers for Rolling Stone: "Comic relief and, boy, does this movie need it arrives with scene-stealer Jar Jar Binks, a gangly, floppy-eared Gungan, voiced hilariously by Ahmed Best but otherwise a fully digital creation. Jar Jar is an alien amphibian who lives in an underwater city and speaks in a pidgin English that still gets the point across."

Our very own Total Film magazine: "The simple fact is this is a fun movie that only dedicated Star Wars-haters will fail to enjoy on some level. It has the requisite amount of monster madness and laser-showered space-based dog fights, and the climactic showdown is everything you'd hope for, combining a pitched battle between skeletal droids and amphibian aliens, an off-world attack on an immense spaceship and a three-way lightsaber showdown."